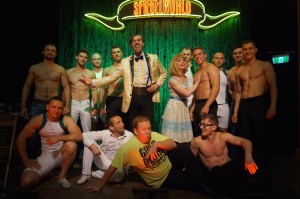 If you’re keen on burlesque, circus, comedy, and vaudeville, then you’d probably enjoy heading along to Absinthe – now running in Sydney until October 25th. From the Las Vegas live entertainment production company Spigelworld, famous for Empire, Absinthe bursts onto the scene with a tantalising cast of talented performers.

The evening begins with the Chair Stacker (Oleksandr “Sacha” Volohdin) performing a feat of extraordinary heights, which ends in him balancing atop a structure of teetering chairs. From there we get immersed into a range of acts that each seek to blow away the audience. Some of these easily succeed – such as the boisterous strength of  the Los Dos Tacos horizontal bars routine, the elegance and grace of Jacob and Maika’s ‘Duo Straps,’ and the pure determination and talent of the final performance, a high wire routine by The Frat Pack.

Other routines, however, leave nothing to the imagination. We are not blown away by the raw talent of the performers but are instead treated to indulging in their body. Take, for instance, Australian’s own Karla Tonkich – ‘The Green Fairy.’ Karla has a great singing voice and serenades us at the beginning and end of the show, however her whole act is about her looks. We see 99% of Karla’s body, yet are treated to barely any of her talents. Combine Karla’s appearances with those of the assistant Abby to the show’s host, The Gazillionaire (she acts as the dumb and annoying PA), and to the school girl-esque performance of German duo Laura von Bongard and Luka Clayburn, and you start to see a theme. It appears as though the women of the show are here for our physical or for our laughing pleasure. None of these acts stood out to me as incredibly interesting or full of talent; so I quickly became an annoyed feminist onlooker instead of a happy-go-lucky circus-goer.

I found myself, then, very conflicted. Whilst on the one hand I was in awe of the performances before me, I found myself criticising the show every single time a female was involved. I wanted to see female performers do the strength work of the male performers; I wanted their spotlight to be about what they could do and not what we could do to them.

So, if you’re into the circus routine of the stereotypical girl-as-assistant and men-as-performers, then yes, definitely head along to Absinthe. There are some incredible acts to behold and the evening can quickly turn into a fun one if you’re a bit tipsy and are looking for a place to laugh out loud after a long week at work. However, if you’re after the sort of show that challenges you and moves you; this one’s not for you. You have to give the creators and the performers credit – they have talent and they know how to put on an entertaining event. But, for someone like me, who maybe thinks too much and is probably just a party pooper, I left the Spiegeltent unimpressed.