all my love: review 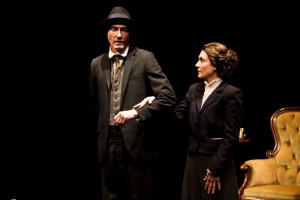 We can all relate to the struggle that teachers go through when they try to teach history. Things that have happened in the past can often be a bore and leave students feeling uninspired. So, when you set out to create a “period piece” of sorts i.e. a history lesson presented on the live theatre stage, you’d better have some tricks up your sleeve, otherwise your audience may not feel the passion that you’re trying to recreate.

From the get-go at opening night of All My Love at Riverside Theatre in Parramatta, I could sense that we were in for a history lesson. I had hoped it would be somewhat directed towards a younger and more contemporary audience, considering that it was telling the tale of famous Australia poet Henry Lawson and his missed love affair with fellow poet Mary Gilmore, a subject that doesn’t immediately grab the attention of anyone under the age of 60. What we were presented with, however, was nothing more than your standard history class, and I soon became sorely disappointed.

Backed by two stiff and lacklustre performances and set design, music, and direction that seemed to be reminiscent of a speedily put together high school play, All My Love had so much potential but wasn’t able to live up to any of it. It felt as it the production itself was in the same position as the characters. Henry and Mary grew to love each other and then were thwarted from keeping in contact by Henry’s mother, Louise. It’s a depressing story of something that could have been, but was never allowed or pursued. With the production itself, I get the feeling that the ideas and passion were there, but there were too many barriers in the way that prevented a fantastic vision to come true.

So, as much as I didn’t enjoy the production, I can definitely understand where it’s coming from and appreciate the effort put into telling an unknown story to a modern audience. It seems that a modern and contemporary audience was not taken into consideration, however, and I do wonder what might have been different if that hadn’t been the case.

Sincere praise, however, should be given to the playwright, Anne Brooksbank, who carefully researched the lives of these two betrothed lovers. It’s clear that she put in a lot of effort to try and capture the exact flavour and feeling of what was going on in their lives. Brooksbank succeeds in bringing to life these real-life lovers and it’s a testament to her patience that she was able to capture so much from just a few lost letters and diary entries.

Perhaps All My Love, then, does have a place in the stage repertoire, however I hope that with further adaptation there is more risk taken to make the production itself feel newer than the characters we are learning about.