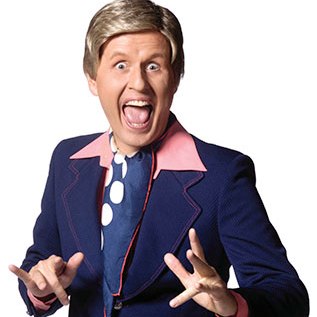 Bob Downe is one of those Australian comedians who most of you would probably identify as just “that guy”. You know, those people who have been around for ages but don’t seem to do much these days to warrant their continual presence on your cultural radar.

When Bob and his polyester pants returned to Adelaide I was curious. People love him, and I wanted to know why. I feel I should clarify that – old people love him. I’m not saying that being old is bad, and I don’t want to label everyone in the audience as old (lest I offend them, bless their wrinkly hearts), but I was definitely the youngest one in the audience.

Downe is comedian Mark Trevorrow’s alter-ego: a flamboyant blonde wig-wearing crooner. The show consists of Downe’s cheesy smile and his humorous renditions of songs such as Love is in the Air and Land Down Under. He works the crowd, flitting in and out of the auditorium to talk to his adoring fans.

Trevorrow is clearly talented. No matter what kind of silly voice he adopts, his musical skill is obvious and his banter is undeniably witty. His performance with guest Anne Wills (whose vocal power is amazing) is a highlight, with both greatly enjoying their time onstage.  He plays up the camp factor and manages to only slightly overdo it, and the audience sings along and laughs the hour away.

And yet there are many moments when I find myself questioning the show. Not the talent or the content on the whole, but a few jokes which come a little too close to pushing my buttons. Jokes like (and I’m paraphrasing here) “I’m entering the London Olympics, in the 100 metre ‘run like a girl’”. Off the cuff remarks made when a female audience member gives Downe back the pants which he had her remove (don’t worry, he had another pair underneath) without folding them: “Clearly she’s not a mother”.

By no means do I think there was any malice involved, and I’m sure most people will brush aside these concerns and tell me that I’m reading into things too much. But why is the culture of demeaning women for everything from their movement to their parenting skills so pervasive? Why can’t I go and see a fun show without someone insulting my gender?

I’m not denying that other shows would insult men (in fact, this one sounds like all it did was insult men), but that’s not the point I’m trying to make here. I enjoyed the majority of the show. I can see Trevorrow’s talent, even if his appeal seems a little dated. But I left with more than just satisfied curiosity – I left with questions. Why is it ok to make disparaging remarks about women? Why do gay performers perpetuate gender stereotypes? How long will this be acceptable for?

Definitely not what I was expecting to take away, but food for thought nonetheless.

Bob Downe – 20 Golden Greats is playing as part of the Adelaide Fringe Festival at the Arts Theatre until March 17.