Growing out of the Women’s Art Movements of the 1970s, a new movement of Mother Artists is gathering strength in Australia and internationally. Intertwined: Exhibiting Mother Artists, at the Australian National University School of Art in Canberra, shows the range of social concerns that feminist mother artists are aesthetically and culturally addressing:

What is a mother-artist? Is it any artist who makes art representing mothers or motherhood?
No it’s an artist who is also a mother.

An artist who is also a mother—what is so special about that—why not non mother artist, or daughter artists or—
It’s an artist who is a mother who makes art about representations of the mother and motherhood.

There is another question that viewers might ask at the exhibition Intertwined: Exhibiting Mother Artists, at the ANU School of Art.

If a mother artist is an artist who is a mother, what can mother artists show us that artists who are not mothers cannot or do not?  The answer is they can show us about subjectivity and the self of the mother as an artist.

Is this significant?
Yes it is!

Madonna and Child, the Artist’s Mother – mothers have throughout the history of western art been a standard represented trope in figurative art and these historically elevated representations are just about all by male artists.  They are objectified “objects” of a gendered male gaze, by virtue of being made by men objectifying mothers.

This is exemplified in the literally iconic representations of the Madonna.

In the past western history of art and society, mothers were not allowed to be artists, let alone exhibiting artists.

Mothers were accepted if they played the supporting part of wives or mistresses, or grandmothers, assisting male artists to work in the studio and in the home.

It is only quite recently in art history, in the 1970s feminist movements, that women en masse challenged their exclusion and began to hold their own exhibitions, in public. The 1970s feminist Women’s Art Movement (WAM) as it came to be known was divided over mothers, with separatist feminists seeing them as “colluding with the patriarchy” by having babies.

Now, forty years later, this is changing in Australia and around the world. In the US, Mamapalooza runs festivals, and in Canada, MIRCI, the Motherhood Initiative for research and Community Involvement at York University, Toronto, has a publishing house, Demeter Press, journal and annual conference. In Australia, an art movement has emerged of mothers of all ages who are artists, who are remaking the image of motherhood and making art of and about the mother, self and motherhood as is seen in Intertwined.

In the series Last Things, photographic prints and writings rethink amnesia, loss of a mother and the processing of grief through digital photography. The photographs in the exhibition were taken when I flew from Sydney to London for my mother’s funeral and unexpectedly had to go to clear my deceased mother’s hospital room of her things. I took photographs and have written on this in an essay, ‘First Things: Reflections on Single-lens Reflex Digital Photography with a Wide-angle Lens’ (published in the International Journal of the Image Vol. 3, 2013) which is displayed next to the digital photographic prints in Intertwined. 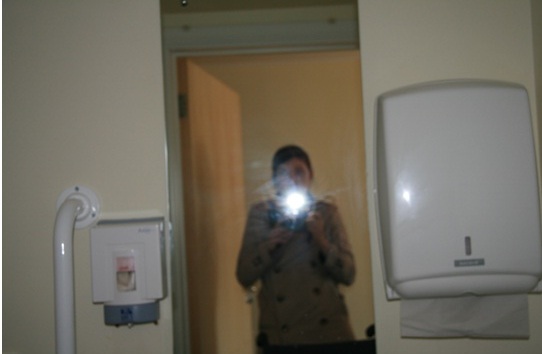 Vee Malnar, curator, is an award-winning playwright and recipient of an Edna award for feminism in the arts. Her paintings and photo-art reflect on the connection between mothering, housework and identity. Denise Ferris, Head of the School of Art, makes works that explore constructions of the maternal using light-sensitive milk emulsion. Jasmine Symons’ oil paintings question identity, Paloma Concierta’s work on maternal illness focuses on hospitalization. Catherine Kennedy is concerned with loss and finding a new way in which to feel comfortable and at home with one’s self. Linda Clark investigates uses of ritual and relics related to the motherhood role, and Susanne Ilschner reflects on the lack of control that women can feel when they become mothers. Danielle Hobbs’s mixed-media assemblage explores ideologies, contradictions and complexities of “good” and “bad” motherhood informed by Postnatal Depression. Irena Storay is a great-grandmother, poet and painter. Lesley Dimmick runs TAP gallery in Sydney and is a painter who has been awarded an OAM for her work in the arts. Also included are portraits by recently discovered Joan Holt (1926-2005) publicly displayed for the first time, and contributed by her daughter Charlotte Bunt.

All the works in the Intertwined exhibition are different and individual, made in a range of media, used in both self-based narratives and conceptual ways, traditional and contemporary approaches ranging from still lives, self portraits, video, mixed-media assemblage, portraits of others, paintings, to photographic media prints of objects in a mother’s death chamber. The artists exhibiting in Intertwined have in common that they are exhibiting and see this as part of being artists, and they address some of the social concerns of motherhood from the perspective of being mothers.

That’s why it’s not just innovative but aesthetically and culturally significant.

Come along next week, see the art and hear the artists on Saturday between 2-5pm May 9.

Author-publisher, artist and curator Ruth Skilbeck’s novel Australian Fugue: The Antipode Room will be launched on Saturday 9 May at 4.00 pm.

Intertwined: Exhibiting Mother Artists at the ANU School of Art Childers Street, Canberra, from 4-9 May, 2015.

Ruth Skilbeck, PhD, is an author, publisher, arts writer and photographer. She worked for years as a freelance arts journalist and art critic for arts periodicals in Australia such as Art Collector, POL Oxygen, black + white (most of which have folded) and worked as a writer in Dublin for national newspapers, and London, for the BBC World Service and on Fleet Street. Her work appears in international journals: International Journal of the Image, Communication and Critical/Cultural Studies and others, and she is the founder of PostMistress Press. She writes a blog The Daily Fugue on the writer-publisher.