Last Friday artnet released its list of the top 100 most collectible living artists. Proclaimed as having the world’s largest and  most comprehensive price database for secondary market sales of fine and decorative art, the website compiled the 100 strong list of artists who are most collectible when it comes to the auction block and, surprise surprise, only three of them are female. Three.

Instead of getting rightfully indignant and writing an article about the continued gender bias women face in the art world, here at Lip we have decided to not ruin your day and instead focus on these leading ladies themselves.  So in no particular order, meet the three women who rank in the top 100 of today’s most collectible living artists! [Sob].

Regarded as one of the most influential artists working today, Cindy Sherman is an American photographer and film maker best known for her conceptual self-portraits. Working in series’, Sherman raises challenging questions about the role and representation of women in society and their portrayal in the media. The artist acts as both model and photographer in many of her works, exploring notions of creation and identity through carefully constructed characters and staged tableaux. Cementing her reputation in the 1970’s with the series ‘Untitled Film Stills’ (1970-1980) – where the artist enacted female clichés of 20th Century pop-culture- Sherman has expanded her practice to utilize more grotesque and macabre imagery with elements of horror and absurdity, as seen in ‘Untitled Clown Series #1 and #2’ (2004) and the famous series of mutilated mannequins entitled ‘Sex Pictures’ (1992). 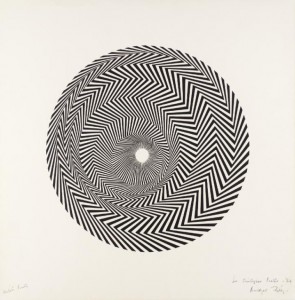 English painter Bridget Riley creates striking paintings based on optical illusions and was highly influential on the psychedelic imagery of the 1960’s with her work influencing celebrated fashion designer Mary Quant. Fascinated by the act of looking, Riley’s chief interest lies in the way the brain creates the appearance of movement between shapes and lines and her distinctive, often disorienting work, aims to encourage the viewer to engage with the act of observation. The artist paints in an abstract style based of real-world inspiration and her work is often characterised as Op Art. 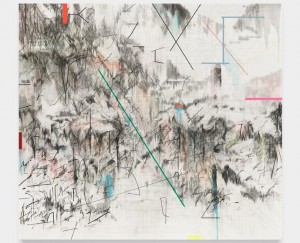 Using architecture and the city as a point of departure, Julie Mehretu creates large, gestural paintings that have been built up through layers of acryclic paint on canvases overlaid with architectural drawings in pen, pencil, ink and thick streams of paint. Born in Ethiopia, Mehretu migrated to the US with her family shortly after the revolution in 1974 and much of her work is informed by her experiences in building identity as a migrant. Through her abstract paintings, the artist creates ‘in-between places’ and her work investigates a compression of time and space whilst conveying the presence of emotional space and its role in identity building.

If you’d like to acquaint yourselves with more female artists who are commanding the big bucks, check out artnet’s list of the top 10 most expensive living female artists.