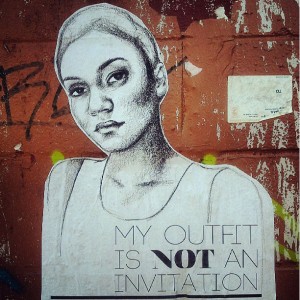 Most women could say that they have been harassed on the street in one way or another in their lifetime. Whether that be in the form of unwanted verbal slurs, or eyes that tend to linger and follow you.

I myself, just a couple of weeks ago, while walking my dog during the day in a safe, Canberra suburb, was circled by a car a few times which eventually stopped and I was asked whether I wanted a lift.

Although at the lower end of the harassment scale (how appalling that such a thing should exist), I now unfortunately look over my shoulder more than I should and take the busier roads to walk down. Something no one, in their own neighbourhood or elsewhere, should feel as though they need to do.

Oil painter Tatyana Fazlalizadeh was so fed up with similar treatment that she produced an illustrated self-portrait, added the caption ‘Stop Telling Women to Smile’, and plastered copies all over her Brooklyn neighbourhood.

A year later with $35,000 raised, Fazlalizadeh has taken her project (aptly named after her first portrait) on the road to combat sexual harassment.

Stop Telling Women to Smile features captions, inspired by conversations with other women, such as ‘You Are Not Entitled To My Space’, ‘No, You Can’t Talk To Me For a Minute’ and ‘My Name Is Not Baby, Shorty, Sexy, Sweetie, Honey, Pretty, Boo, Sweetheart, Ma’.

Fazlalizadeh uses paint as her voice and hopes to make a statement with her works. In an interview with Women of Colour, she speaks of her inspirations and socio-political topics.

‘I’m inspired by many things: the distress and injustices that people around the world continue to experience, the beam of a child’s innocent smile, the solemn look in a heartbroken woman’s eyes.’

In response to those who might not believe that gender-based street harassment is a problem, Fazlalizadeh had the following to say:

‘There are always those who want to tell women that their experiences are not valid or not important whenever they speak up. For me, as a black woman, this is particularly true. Wanting the basic right of feeling comfortable and safe and not sexualized as I walk out of my house is very much worth prioritizing. There’s also the point that gender-based street harassment easily lends itself to more conspicuous issues such as rape and domestic violence. It’s a matter of control over women’s bodies. And it’s a serious issue to address.’

Fazlalizadeh’s portfolio can be viewed here and her prints are for sale here. She has also had her work featured in the Art for Obama book.