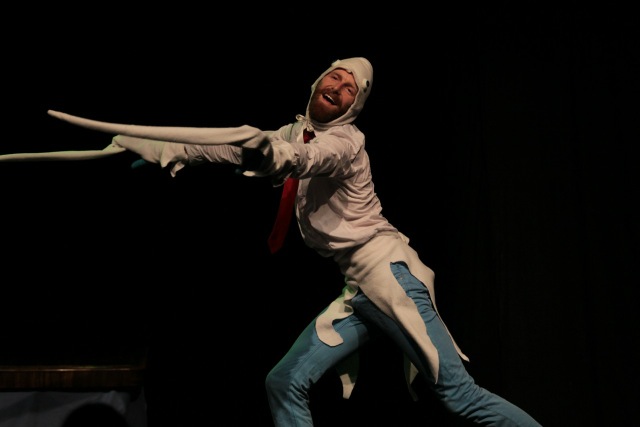 Originally performed as part of the 2012 Adelaide Fringe Festival, Squidboy is show about, well, a squid boy. New Zealand’s Trygve Wakenshaw (of Auckland theatre company Theatre Beating) is the squid in question, a tall, bearded man decked out in a pointed hat and long, flowing, tentacled arms. Through just this simple costume Wakenshaw becomes the imaginative Squidboy, a character whose every friend, pet and acquaintance is purely made up.

Squidboy uses his imagination to populate his life, from his dog Poochie to his love interests. Wakenshaw’s sound effects are the most effective tool used to create the illusion of these other beings, with his yaps and huffing breaths creating a very animated Poochie. Together with his dog, Squidboy goes on a date, travels abroad, and talks to his arch-nemesis Whale.

The show’s humour is playful and understated, creating a warm and interesting production – the moments when Squidboy, in fear, yells “Ink!” before the lights blackout representative of this liveliness. Being a one man show, Wakenshaw uses much physicality to underline his actions, be they unlocking and walking through a never-ending series of doors or throwing a stick for his dog. Coupled with his vocals, his movements are key to the show’s storytelling, and at times his actions are unfortunately a little unclear; this creates a certain level of confusion which could be cleared up through cleaner gestures.

Where the show lets itself down the most is in the ending. Squidboy breaks the fourth wall to talk to the audience, interacting with an audience member to create an imaginary bedroom. While the end of the sequence is a charming display of ‘fireworks’ (confetti falling from the ceiling), the process of audience participation leading up to this moment is a little stilted. The fireworks themselves are a fitting symbol of the theme of imagination that underscores the show, but the road to their release is unexpectedly awkward.

For this showcase performance, creator Wakenshaw workshopped the performance for three weeks with Adelaide director and co-writer Carli Lewis, and sound designer Daniela Lucchetti. Having not seen the original show, it is hard to say how profound the changes in this development period were, but it is clear that a lot of love and hard work has gone into recreating Squidboy into a well-rounded performance.  It is family friendly without being inane, a draw card for parents; it is also whimsical without being cutesy – a tough balance to achieve. Squidboy’s redevelopment shows that one man can tell a story, with a little help from his friends.

Squidboy played as a showcase viewing on June 2 at the Tuxedo Cat in Adelaide.