The Found Festival was a nine-day, multi-platform arts festival. It consisted of an all women-produced art exhibition in the Magdalen Laundry and funky nightly festival events at the Shadow Electric, both within the Abbotsford Convent complex. When I asked Found’s producer Kirsty Hulm why she chose the Laundry for an all-women’s art festival, she said that ‘it’s been a site of misery for a lot of people, particularly women.’

The Magdalen Laundry, like others of its kind around the country, was a product of the first wave of Australia’s child protection “rescue movement” of the 19th century. Girls who didn’t fit in, were pregnant out of wedlock or behaved in any way that didn’t fit the social mores of the time were sent to undertake unpaid domestic work and live in the Laundry’s accommodation.

‘The laundry space was just really intense to me,’ said Hulm. ‘It has an intense feeling even when it’s empty. I was pretty horrified.’ 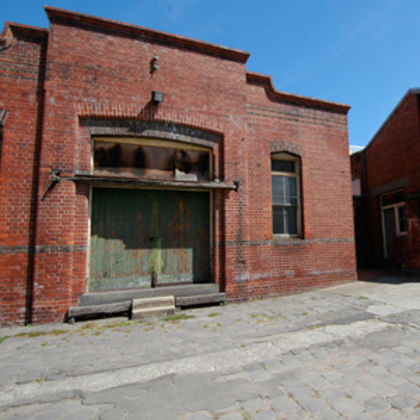 ‘We welcome the strange, the absurd, the mal-aligned, the outliers and the deviants. In fact we welcome everyone. Found draws attention to a serious history while presenting you with a program that is silly, crass, harsh, spiritual, intelligent, funny and raunchy, because that is the history that they sought to erase. The way we see it – if we choose to stop apologizing for being these things, eventually we will stop being expected to.’ – Found Initiative website

“Ungodly,” the closing-night event billed as an existential performance party, was a hedonistic celebration of life, death and sin. About three hours into the event, there were two people writhing on stage in what looked like a semi-choreographed dance. Behind them, Jackson 5 videos were projected on a screen. To open the show, a man with an acoustic guitar sang an old spiritual hymn, backed by a diverse chorus of varied genders, ethnicities and ages. It evolved like a flash-mob as planted audience members chanted a slow, monotone “death.” The performances were entertaining, but felt silly rather than thought-provoking. The feel was more costume party than confronting existentialist conversation.

Wayward Sounds, the festival’s celebration of riot grrl culture and its contributions to pop and art, was on point. Found couldn’t have asked for a better event to share the convent with than the wedding expo taking place one building over. The juxtaposition of women looking grungy, fierce and angry with women looking at white gowns and lace for their wedding days alone was performance art. Questions of what it means to be female, feminine or feminist practically posed themselves.

Laneway Learning provided a workshop on how to braid hair. Judith Butler said that all gender is drag, and hairstyle is an apt illustration of that. What is more girlish than pigtail braids? Learning to braid hair is practically required knowledge for growing girls.

Hulm expressed frustration with the fact that media labeled Found a feminist art festival. She wondered aloud why everything billed as “all women” was immediately feminist and as a result, niche. I share her frustration with the implication a show featuring only work by women is niche art when a men’s art show would not be labeled as such. Art museums or exhibitions by men have been status quo for years. If a man showed his art in a museum, he would probably not be asked about his gender or how his art is shaped by it. However, there were overtly feminist and political themes on display at Found. Questions of femininity, motherhood and positive protest are more than subtly feminist. Whether intentional or not, the assertion that women’s voices should be exalted in art continues to be a political one. Careful reflection on trauma and the power of women’s voices are feminist themes. It is offensive that womanhood is still a barrier to success in the arts world, where men continue to reign supreme. Art, like cooking, fashion and dance, is seen as feminine when it’s amateur or childhood amusement.  The second it becomes professional or competitive, men soar to the top.

Hulm and her co-conspirators designed a festival that was equal parts insightful, zany and brilliant. Is an arts festival that aims to promote women’s work and meaningfully engage attendees in positive protest necessarily feminist? Yes. Is that the most impressive aspect of the Found Festival? No. The art was spectacular and thoroughly stimulating. For example, contributor Katherine Riley could not attend the festival and produced a booklet inviting attendees to email her with descriptions of their visual experiences of the artwork. The films chosen for the Valhalla Cinema event were entertaining and confronting. The opening night party, Kink, was a debauched celebration of women’s minds and bodies.

Though the 2014 iteration of Found is over, this is not the end. The Facebook page, festival website and twitter will carry on as the Found Initiative. Although the future work of Found is still in the development phase, the twitter bio proudly proclaims that it is an “info source & events program for Power Babes to Unite.”