book review: bleed for me by Michael Robotham 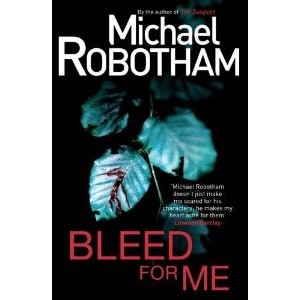 I really wanted to like this book. No, I really wanted to dive into it and feel it thick and gluggy and totally enveloping. I didn’t, but I wasn’t wholly disappointed either.
Michael Robotham is a Sydney-based author with impressive credentials. The Night Ferry and Shatter were shortlisted for the UK Crime Writers Association Steel Dagger and Shatter won the 2008 Ned Kelly Award for Australia’s best crime novel.

The central character in Bleed For Me is the damaged and tic-ridden Joseph O’Loughlin, who must contend with a murder case while also trying to salvage his relationship with his estranged wife and two young daughters.

O’Loughlin narrates the tale, yet I found it difficult to sympathise with or warm to him. I must qualify though, that this is my first entry into Robotham’s novels and this is the fourth in the Joseph O’Loughlin series. Readers who have enjoyed the previous three novels would be advised to invest in Bleed For Me, as the story continues daughter Charlie’s progress and follows the fraught O’Loughlin marriage that has been previously tangled and untangled.

The basic storyline is that teenage Charlie’s best friend, 14-year-old Sienna Hegarty appears to have stabbed her step-father to death and is so traumatised by the experience, she cannot remember the events that lead up to the murder, nor the butchering itself.

Clinical psychologist, Joseph O’Loughlin, feels compelled to prove Sienna’s innocence, driven by Charlie’s insistence that Sienna couldn’t have murdered ex-cop and rumoured paedophile, Ray Hegarty, despite being discovered soaked in his blood.
O’Loughlin finds himself personally entangled in the case, variously suspecting and dismissing suspects including notorious criminals on trial, teachers, family and lovers. It took me until the final third of the novel to really feel driven to follow the thrilling storyline. Perhaps if I hadn’t been so adamant about finishing a book that I’d started, I wouldn’t have stuck with it so long. Ultimately, I’m glad that I did. The final exciting and tightly-scripted chapters are involving and well-paced. They show the evidence of a crime-writing expert.

My recommendation would be that readers precede this novel with the first three Joseph O’Loughlin novels and give Robotham the chance to introduce his crime-fighting clinical psychologist to you as was intended. Perhaps then, the plodding of the first few chapters and the weakness of O’Loughlin as a sympathetic character will be more easily forgiven.

One thought on “book review: bleed for me by Michael Robotham”