book review: the heir of night by helen lowe 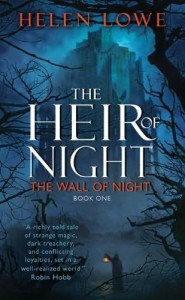 After becoming completely absorbed by Isobelle Carmody’s epic fantasy series, The Obernewtyn Chronicles, and needing to find a story as equally fierce and engaging to fill the hours before sleep, I found Helen Lowe’s first adult fantasy foray, The Heir of Night.

The novel is set in a dark and forbidding time is the world of Haarth, a land divided by different people and different beliefs. In the far north lies the House of Night, one of the nine Derai Houses, who must guard The Wall and keep the dark forces beyond from entering the relative peace of their land. It is a history of fleeing and fighting; an unending battle between The Darkswarm and the Derai that has been raging from time immemorial.  Bordered by The Wall, the Derai folk must hone their skills in fighting and watchfulness, in order to survive the harsh conditions of their bloody history and the secrets of their ancient legacies. Enter our story’s heroine, Malian, a child barely into her teen years who is the heir of the House of Night and a child whose imagination for the great heroes of old takes her to flights of fancy. Heir to a warrior people and a father who has little time for the fancies of his only child, Malian finds friends amongst the staff of her father’s household. But time and peace don’t reign forever, and soon Malian and the House of Night are threatened by their ancient enemy. But the onslaught of the Darkswarm is only the beginning for Malian, who finds she must journey far and wide to find out who she really is and what she was born to do.

With fast-paced flowing dialogue, authentic characterisation and a well-thought out world, Lowe has breathed life into a plausible story full of life, charm and challenges. Malian is interesting, in the fact, that she retains the naivety and innocence of the Derai’s old beliefs and the hard-won adult experience of seeing more than her years. Malian has the ability to use magical powers, which see her as the Derai’s foretold Chosen One, whose destiny it is to defeat the Darkswarm, but also outcast from her home, since the Derai are suspicious and untrusting of those with the Old Power. Along for the ride is Kalan, a child in the same position – having been disowned by his family for possessing power – who helps Malian on the road to her eventual fate.

Lowe intertwines their different perspectives throughout the novel, ensuring no stone is left unturned for the reader to delve into the mysterious fates of these two Derai children and the monumental task they have before them. Malian and Kalan, like many of our beloved heroes, are flawed and inexperienced which makes for a captivating tale because, as readers, we learn with our characters along the way.

The Heir of Night is a traditional fantasy epic – ancient prophecy, hero, allies, enemies, foretold destiny, fate, magic – but it has the panache to find fans of this fantastical fiction. Like Harry Potter, Malian is a reluctant hero who does not relish the fortunes of being a saviour, (‘To be something more than just a vessel for ancient prophecy’) which is why we love her, and feel compelled to follow her fate. Malian, like many more of our beloved reluctant heroes, uphold the virtues that we all strive for – unselfishness, bravery, compassion, strength – and which we love reading about.

As a female, I love reading about strong heroines, and The Heir of Night delivers that, and so much more. Lowe has imagined a powerful story that will ensnare fans for her series, The Well of Night and cement her status as a New Zealand author to watch.

One thought on “book review: the heir of night by helen lowe”