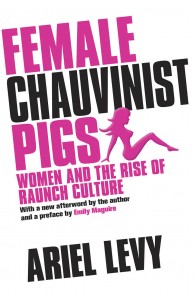 In ‘Female Chauvinist Pigs’ author Ariel Levy questions what it means to be sexy today. Her search takes her all over America into strip clubs, women’s living rooms and onto a Florida beach where girls are encouraged to strip off their clothes for the cameras of hit TV show ‘Girls Gone Wild’. She finds a society that is seemingly bereft of the values that Gloria Steinem and her comrades fought so hard to earn back in the seventies and eighties. Instead of continuing the push for equality we have somehow transgressed such that “playboy bunnies (and airbrushed and surgically altered nudity) now epitomize female beauty.” We have resurrected so many of the stereotypes surrounding female sexuality and somehow passed them off as empowerment. Resultingly, we are almost as far back as we started.

Today, instead of aspiring to be free thinking, empowered women we dream of resembling Pamela Anderson, Angelina Jolie or Paris Hilton – all our hopes rest on attaining a male-approved ‘sexy’ appearance. Or worse than that, we try with all our might to become more like men. These are the women Levy describes as female chauvinist pigs. They are women who would rather join the male chauvinist pigs than fight them – ‘why throw out a boyfriend’s playboy when you could be partying at the mansion?’ Levy found this proposal as frustrating as I did and rebuts this idea with the following: ‘even if you are a woman who achieves the ultimate and becomes like a man, you will always still be a woman. And as long as womanhood is thought of as something to escape from, something less than manhood, you will be thought less of, too.’

Today we conform to male ideals and objectify ourselves for their pleasure. Do we really find the playboy bunny routine the most sexually satisfying? At risk of standing alone I would argue that no, we don’t. Currently we surround ourselves with images of females posing in skimpy underwear and faking lust and call it hot and empowering. Levy poses that this is not progress but “a testament to what’s still missing from our understanding of human sexuality. We are still so uneasy with the vicissitudes of sex we need to surround ourselves with caricatures of female hotness to safely conjure up the concept ‘sexy’. When you think about it, it’s kind of pathetic.” Sex is no longer promoted as an act of mutual enjoyment but exists as a platform for consumerism and male empowerment.

Perhaps the worst thing I realised while reading this book is that while this industry gets stronger and younger and younger girls aspire to be pole dancers and beauty stars, modern feminists are using buzzwords from the feminist movement to validate what is happening. Acts like stripping off and lathering ones body with soapy water in front of men are being promoted as empowering. Tabletop dancing, painfully waxing vaginas, auditioning for Playboy, and helping to create lads magazines are all suddenly being cast as the new ideals for women. Do these and you will be demonstrating your liberation, enjoy these and you will be free.

Women who feel constrained by this environment are encouraged to stop being prudish or frigid and shake off the shackles that bind them. Note that these are not the women who are conforming to male ideals and parading themselves for male pleasure. No, these are women who understand that any progress made by the feminist movement is being destroyed before their eyes and who want no part of it. These are women who actually are liberated. They don’t feel the need to strip, emulate men or conform to their beauty ideals because they already feel sexy, competent, funny and smart. The key is that they don’t need male approval to feel good about themselves. Rather than be constricted by what popular culture deems as sexy, they are free to explore what they want from sex and how they will look while doing it. These women are far from frigid and prudish, they are the role models we should be looking to.

Female Chauvinist Pigs had so many great lines and so many interesting ideas that I simply couldn’t cover as much as I wanted to in this article. If you did find reading this interesting though, I can assure you that the book itself is a hundred times better. Go buy, borrow or just somehow find a copy and bunker down for a seriously good read.