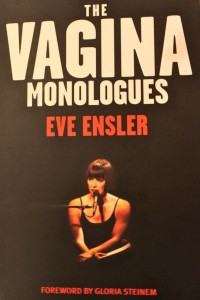 The Vagina Monologues by Eve Ensler is a book I honestly believe every man, woman and young adult should read – excuse the cliché. It is unlike anything I have ever read before and was so gripping that I read it in one very emotional sitting.

The book was first written in 1966 after Ensler had interviewed some 200 women around the world about their vaginas. Ensler first shared her work in the form of a play, which soon grew to international success. Despite this, it wasn’t until 1998 that Random House published the novel along with a collection of letters about the Monologues, to Ensler herself. On Valentines Day, in the same year the book was published, Ensler gathered together a host of celebrities including Whoopi Goldberg and Susan Sarandon to put on a performance of the Monologues in New York. This event was the launch of what is know known as V-Day – a day to promote and encourage the movement to end violence against women and girls. This single event has spurred an increasing number of V-Day events that occur on February 14 each year.

As the title suggests, the Vagina Monologues includes short pieces from different women about their Vaginas. Interspersed within the pages are short survey results with lists of answers to questions such as: ‘if your vagina got dressed, what would it wear?” My favourite answer was undoubtedly “a large hat full of flowers” purely because the image of a vagina wearing a sophisticated hat amongst a formal gathering of elderly woman danced straight into my mind and hasn’t left for days. As well as providing quite a few moments of hilarity like this one, the book is also quite sobering at times and covers many heavy themes, particularly rape.

One monologue in particular reduced me to tears and the power in the short two pages of its length is nothing short of a testament to the women to whom it refers. Entitled “my vagina was a village,” the piece is about a woman who was violently raped over the course of seven days in a rape camp and as a result is both physically and emotionally traumatized. I won’t quote anything here, because it would ruin the experience for you. Just go on and read it. You can purchase the Vagina Monologues on Book Depository for under $15. Click here.

At just 185 pages with quite large font, it is not a challenging read although the language used can be full on at times. There is a short introduction by Gloria Steinem at the beginning, in which Steinem admits to being part of the “down there” generation. This means that rather than using any of the anatomically correct labels for female genitalia people use ‘down there’. I too have used ‘down there’ for as long as I can remember but as soon as I finished the VAGINA monologues, I resolved never to resort to the safety net of obfuscatory language again. The first time I read the book on a train I consciously wrapped my hand around the word Vagina on the cover, but the second time I held it up in front of my face and smiled as eyes darted quickly to the cover and eyebrows leapt madly about.

The Vagina Monologues taught me that by refusing to acknowledge Vaginas by their true name we are in fact disrespecting them. We use them every day, they are carried with us our entire lives and yet we try to deny their very existence by speaking about them in riddles on the rare occasions we are forced to. I feel as though I have so many years of hating-on-my-vagina to make up for. All the times I have cursed having one, cursed its habitual bleeding routine and been frustrated at being denied the ultimate upper hand in life by being dealt a vagina and not a powerful penis. Yes, I have a lot of apologizing to do to my loyal little Vagina.

Another result of reading this book is that I have resolved to say Vagina as many times as I can from now on. At first it felt a bit strange and I still got pink cheeks as strangers gave me odd looks after overhearing my vagina-centered phone conversations, but now I rather enjoy it. Paying homage to your own vagina by allowing yourself not to feel ashamed of it, by not lugging your handbag to the toilets at work but grabbing your pad out and walking with it down the corridor, by refusing to hide the fact that you have a vagina between your legs is remarkably liberating. Once you get past the initial shock of years worth of ingrained habits, you won’t look back.

The Vagina Monologues has changed my entire outlook on life – an amazing feat for such a small book. Despite both its short length and confronting themes I am continually amazed by how much I want to read it again and again. I related to so many of the stories within the book and my only regret was that I had not read this earlier in life.