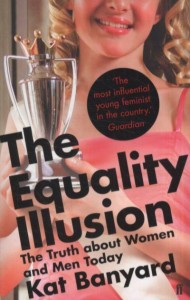 The Equality Illusion by Kat Banyard is a great book to read if you haven’t yet read any other feminist non-fiction. I say this because while it was well written, powerful and convincing, overall it didn’t give me anything I hadn’t already read about elsewhere. If I had read this before everything else though, I would easily have fallen in love with it and been totally amazed by its gripping content. So really, it could be a great hit or bit of a no-brainer depending on what you’ve read in the past.

When it comes to equality, Banyard knows her facts. She interviewed over 100 people for the novel and the bibliography at the back takes up a good chunk of the book itself. She covers all aspects of a woman’s life from morning until night, ensuring that not one minute is left out.

Body image, education, work, domestic violence, sex industry and reproductive rights all get their own chapters. Despite this division the content tended to blur between them all and occasionally Banyard’s tangents ran on a bit too far from the point. As such, the simplicity of these headings isn’t really achieved.

The most shocking part of the book for me was hearing about and from sex workers. Banyard explains the current laws surrounding prostitution and women’s welfare and how even as they attempt to help women, they sometimes end up trapping them there.

One sex worker commented “only now that I am out of it am I free to tell the truth. It’s hard to have a voice when you have a cock thrust down your throat.” It was these first-person accounts that really made this book come to life and that made me grateful for persevering through it.

Another great section of the novel was that on domestic violence. Banyard has used this book to expose shocking inequalities that have slipped from the notice of the majority. Migrant women who arrive in Britain based on a marriage are not allowed access to women’s centres if their husband is abusive within their first year of arrival. If they leave their partner then they will be extradited but even attempting to leave an abusive partner is a risk, particularly if you are alone. The stories revealed in this section go beyond touching. They make your heart burn with anger at a world that allows women to be subjected to such a complete lack of viable options.

If any novel is going to provide you with the emotional charge to take action against inequality I’m willing to bet this one stands a high chance of being it. Sure, the content jumps around a bit but the interviews with women all over Britain tell a story that doesn’t need chapter heads to warrant a read. This one will give you the numbers and the facts behind all sorts of inequalities you don’t want to believe still exist.