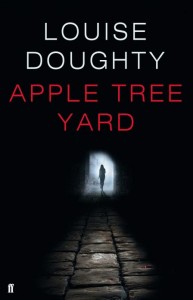 Louise Doughty’s Apple Tree Yard is the story of a smart woman who does a bad thing, and, for fear of revealing her indiscretion, finds herself implicated in a far worse crime.

Yvonne Carmichael is a scientist at the top of her field, a mother of two grown children and a model wife, that is until she begins an affair with the enigmatic X. At first she keeps the relationship compartmentalised, neatly slotted into the gaps between her work and home life. But as desire grows into love, her feelings for X lead her away from her old life into darker and darker places, towards a shocking act of violence.

The story opens in a courtroom with Yvonne on trial for an unnamed crime. From the witness box she sees her case come undone and tries not to make eye contact with her lover and fellow accused. Instead, she speaks silently to him of all that has led them to this point, telling him, ‘The only person I will ever be able to talk to about you, is you.’  This unusual narrative technique gives the reader the impression of eavesdropping on an intensely private conversation. However, it quickly becomes apparent that these are not the words of a co-conspirator and Yvonne’s story is not a confession but a struggle to understand how deeply she has been betrayed.

Doughty reveals the nature of Yvonne and X’s affair and its devastating consequences slowly, dropping small hints with the fine-honed skill of an experienced suspense writer. Some thrillers rely on a shocking twist, which the reader either guesses in the first few pages or never figures out because the logic is so tenuous. In Apple Tree Yard however, strategic foreshadowing ensures there is no shocking revelation, only steadily rising tension as Yvonne’s relationship with X forces her to harbour increasingly terrible secrets.

Initially, Yvonne is not a sympathetic character. In the book’s early pages she cheats on her husband by having sex in a church with X before she even learns his name. However, as Doughty reveals more about Yvonne’s marriage, her relationship with her children, her co-workers and her developing feelings for X, the image of a woman in control, who seemingly has it all, begins to break down. Instead, Yvonne is first made vulnerable, then helpless and finally desperate. She is a victim of a society in which a woman who commits one indiscretion is forever marked, so that she cannot cry out or seek justice when worse crimes are committed against her.

Though undoubtedly a thriller, Apple Tree Yard is as much about love as it is about crime and social injustice. But Doughty is interested in the ugly side of love: the way it can make intelligent, rational women vulnerable and give their trust blindly; the way it obscures its object so that we cannot see that person clearly; the way it makes us willing to make great personal sacrifices for another, even as they keep secrets from us.

Crime has long been a favoured place in literature for female writers to question and antagonise patriarchal hegemony, and Apple Tree Yard is no exception. On one level, it is a tightly written suspense thriller, and on another, questions the flawed logic that a ‘fallen’ woman can only ever be a villain and, as such, does not deserve our sympathy or the law’s protection.