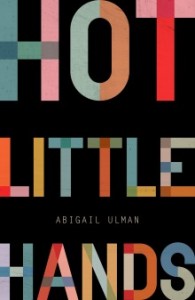 Watching Lena Dunham’s Girls for the first time was an edifying experience. A large part of the show’s appeal for me—and perhaps for countless other teenagers and women in their early twenties—is its flawed and often hapless characters, who are relatable precisely because of their faults.  Here was Hannah Horvath: podgy, solipsistic beyond help, ambitious but ill-disciplined, the antithesis to Carrie Bradshaw. Here, so rarely seen on screen, was realistic (and bad) sex, uncertain relationships, insecurity and imperfection. Here were girls (perhaps not quite mature enough to call themselves ‘women’), who—like so many of us—were ‘almost getting it kind of together’.

If I thought Girls was original, reading Abigail Ulman’s debut collection of short stories, Hot Little Hands, was something of a revelation. Her protagonists are all female, aged thirteen to thirty, and captured at liminal periods in their lives. There is something strikingly familiar about Ulman’s stories, which pulse with vitality and veracity; her characters’ narratives are in part our own.

In the three stories that feature Claire Oglind, a cinema studies PhD candidate, we recognise her struggle with the responsibility of incipient adulthood; in ‘Head To Toe’, about two best friends who have racked up notable experience in the hallucinogenic and sexual spheres, we remember our teenage desire for experimentation; and in ‘Plus One’, in 22-year-old blogger Amelia, we understand the lack of motivation causing her struggle to deliver on a significant book deal.

Ulman’s fiction exhibits such astute perception of mannerism and behaviour that one might easily mistake some of the stories narrated in first-person for personal essays. What is particularly brilliant is her mastery of dialogue, which has all the nuance, irreverence and illogic of reality. Non-sequiturs vivify passages like implicit stage directions.

Used most dazzlingly in ‘Head To Toe’, a few subtle lines are enough to reveal a previous sexual tryst between teenagers Zach and Elise, which sets Elise up for some ribbing from her best friend, Jenni:

‘You can chuck your stuff upstairs in my room,’ [Zach] said.

‘That was at my mum’s house,’ Zach said.

Many of the stories in Hot Little Hands end with no clear resolution, which for the most part adds to their verisimilitude. Life is messy; ambivalence and uncertainty abound. Neatly tied endings would seem too contrived for Ulman’s characters. For most of them, full-fledged maturity and composure seem just beyond grasp. Claire, the PhD student, describes herself as someone who has technically come of age without emotionally having done so. In the processes of self-discovery, in trying to get it ‘kind of together’, questionable decisions are inevitably made: Amelia, the wunderkind blogger, decides to avoid writing her contracted book by intentionally getting pregnant; in ‘Same Old Same As’, another story, the protagonist Ramona appears to use the trauma of her sexual abuse as a tool for canvassing popularity among school friends.

Several of Ulman’s stories have features of the Bildungsroman, or coming-of-age tale, in which experience is gained and innocence is lost.  The haunting ‘Warm-Ups’ most closely observes this form, in which Kira, a 13-year-old Russian gymnast, prepares to travel to San Diego with her teammates and coach. Kira’s grandmother, who has never been to America, laments the girl’s departure, explaining that upon her return Kira will ‘be a woman of the world.’ Claire’s journey is thematically similar: she has left her family and friends behind in London to pursue her PhD at Stanford University. Then there’s Sascha, who spends a day with her high school science teacher in ‘Chagall’s Wife’, who describes that her sexual awakening at age 12 was like ‘being admitted into a new world’.

Ulman’s characters, who are still at stages of their lives when the pressure of others’ perceptions is acutely felt, often act with reckless abandon and studied insouciance that belies their underlying vulnerability. Take Claire: she is newly pregnant when we first meet her, and unintentionally so: it’s ‘for a limited time only’, she declares flippantly to a total stranger; later, she jokingly offers the baby to two ‘grown-up’ friends. Her nonchalance serves as a coping mechanism for a fragility that we are only occasionally privy to. These glimpses are rendered brilliantly, and with muted pathos. For example: ‘“I used to look at your tattoos and think I would still be looking at them when I was old,”’ she tells an ex; or, ‘‘If I was Nicolas Cage I’d be elbowing someone in the jaw right now, but I’m me, so I cry tears onto my feet and watch them sink into my shoes.’

In Lena Dunham’s own debut book, Not That Kind Of Girl, which last year graced the New York Times Best Seller list and the Instagram accounts of veteran non-readers, she decries that ‘there are still so many forces conspiring to tell women that…we lack the gravitas necessary for our stories to matter.’ The significance of Hot Little Hands, which is so enthrallingly and candidly about women, stands counter to such prejudice. It is a debut that demands to be read and discussed. Here is a collection loud with the stories of a generation of young women; Ulman exquisitely gives them their deserved voices.