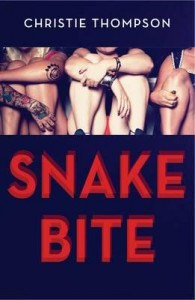 Christie Thompson’s debut novel  relates contemporary Australian adolescence with brutal honesty. As her characters come of age in the grimy outer suburbs of Canberra in 2009, they manifest all the ennui and self-sabotage of the teen years.

17-year-old Jez is bored and disaffected. Her days in a suburb on the fringes of the national capital revolve around attempts to locate some sense of meaning by riding the highs of alcohol and drugs. She drifts through a booze-soaked landscape populated by dropkicks and dropouts, including her single alcoholic mum, and her next-door neighbour frenemy, teenage stripper Casey.

Jez’s best friend Lukey is both her primary partner in crime and the object of her furtive lust. She swoons over his pale skinny body and dodgy tattoos as only a teenage girl can. Their matching uniform of black tshirts, skinny jeans and piercings bonds them in their own minds and in the eyes of those around them. When new girl Laura moves from Melbourne, with her pretty, casual femininity and the exoticism of having two mums, Lukey is enchanted and Jez is threatened. The agonising love triangle that develops between the three is both ephemeral and universal.

As a depiction of suburbia suffused with insularity and closed-mindedness, Snake Bite is tough but sympathetic. Jez feels smothered by her life, and though she cherishes a recurring fantasy of running away to Melbourne with Lukey, this seems an impossible escape. As much as the suburbs trap her, they are also the only place where she has friends, her mum, and a routine, however monotonous and unsatisfying this existence is.

Thompson’s writing is assured, and her accurate reproduction of teenage slang is bold, if sometimes grating. Jez uses ‘soooo’ much gratuitous swearing, frequently interrupts herself with ‘(sargasm)’ to signal bursts of irony, and narrates with loose, messy thoughts:

‘At least there are heaps of drugs available these days. But even that doesn’t really work. My mum is living proof of that. Sure, she can forget about her problems for a while when she’s pissed, but when she wakes up the next day she’s still a fat single mum working a dead-end job living in a shitty govvie in a craphole suburb in whoop whoop Australia, but with a pounding hangover to boot. I don’t want to end up like her. I would rather DIE than end up like her.’

Being restricted to this perspective can become exhausting, like having an extended conversation with a teenage girl who won’t let you get a word in. Jez isn’t particularly likeable. None of the characters really are. But they’re endearing in the way that real people are, an equally if not more impressive feat in fiction. Jez is sexually charged and curious about the physicality and mechanics of sex, but also naïve and strangely ambivalent. Her sexuality is sublimated, and despite her extensive obsessing and fantasising, the connection between sex and love remains murky.

Snake Bite has been compared to Puberty Blues, and it similarly crystallises an era and setting through a determinedly unromantic teen perspective. Jez is fuelled by the contradictory adolescent desires to stand out and slip under the radar. It’s a tough enough life stage to experience, let alone to write about with sufficient verve and truthfulness that those who have lived through its trials will willingly revisit them. Thompson lays bare adolescent angst and destruction with languid precision, then subverts these by revealing the complex mix of power and impotence they contain. If Snake Bite makes for occasionally discomfiting reading, it is because the reality it depicts is itself a difficult and challenging one.