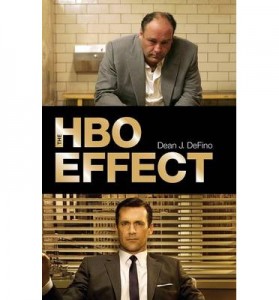 There is nothing so delicious as losing yourself in an excellent TV series. You lie static on the couch for hours; when you go to work, your mind is full of the characters’ concerns; you even dream about them. When you pop the DVD in the player for one more episode before bedtime, tears erupt unbidden, cries of injustice explode from your lips, and suddenly its 4am and you wonder how you’re going to do normal life tomorrow.

In the last twenty years, there has been a new generation of TV shows that exhibit amazing storytelling, brilliant characters, and groundbreaking content. They are literary in their scope, serial in their narrative, and have enormous followings because of their cinematic production values and elemental themes.

Dean J. DeFino, in his book The HBO Effect, writes that the American cable channel famous for The Sopranos, Sex and the City, and more recently Girls and Game of Thrones, has a distinct form of narrative. The Director of Film Studies at Iona University explains that the story style, explicit content and real, gritty characters, have allegedly set the tone for an incredible change in television series everywhere.

But why has HBO been so groundbreaking? The network began in 1972 as Pay TV. Soon after its inception, the channel was the first to broadcast via satellite, and due to this was able to screen content unrestricted by the public code of conduct.

Normally in the US, broadcasts were bound by the Federal Communications Commission, which placed restrictions on the channels in the public airwaves. But the pay service was, you could say, outside the law in this incidence.

‘The easiest way for HBO to distinguish itself,’ DeFino writes about the infantile stages of the network, ‘has been through explicit content.’

The naughty stuff began with comedy. In 1977 George Carlin starred in his stand-up special: ‘Seven words you can never say on television’, which mocked the respectable restrictions of regular television.

Following on from the success of this program, HBO has always defied convention. Swearing was allowed—not to mention gratuitous violence and sex.

Oz, which aired in 1997, depicted the first prison rape, while Tony Soprano beat a man to death with a frying pan after The Sopranos began in 1999. And now, Game of Thrones champions the technique of ‘sexplication…where characters reveal key elements of back story during coital conversation.’

Sex, violence and swearing: HBO was responsible for heralding a new era of obscenity and giving it to the masses (who paid). As a groundbreaker in its field, the innovative channel became a template for other networks who wanted to produce equally successful shows. On the unique influence of the channel, DeFino writes: ‘As the general public has become more tolerant of relaxed content standards…we have seen something of a bleed-over into broadcast and basic cable.’

But HBO didn’t rest on these laurels alone. The network brought quality long-form narrative from the big screens to the small. In the dramas that the HBO team have produced, we see some distinguishing features that were previously unvisited in TV, such as ‘verisimilitude, moral ambiguity, psychological realism and narrative irresolution.’

The people are real. In Six Feet Under, everyone dies and the characters are forced to face their own mortality. HBO programs compel us to watch individuals who grapple with aging, the desecration of family values, and their own ache for power, ‘with a mix of sympathy and disgust’. Creations in Six Feet Under and others set the scene for characters like Don Draper (in AMC’s Mad Men), Walter White (in Breaking Bad, also by AMC) and Christian Troys (the star of FX’s Nip/Tuck).

Nothing is saccharine, and narrative conventions are thrown out the window. Many questions are left unresolved (the end of The Sopranos’ six-season run finished in the middle of an ambiguous scene), and the characters adhere to minimal morals. HBO introduced us to ‘stories that are unwilling to surrender hard truths about human nature and social institutions to the facile ‘happy’ endings that once dominated award-winning television drama.’

DeFino also notes HBO’s excellent depiction of female characters. In that, they were like actual people.

‘HBO series are willing to put aside many of the trite notions of women perpetuated by television over the decades: the happy homemaker and harmless screwballs; the derelict hookers and femmes fatales; the ‘right on’ feminists and superwomen who effortlessly balance career and family. In their place, they offer complex characters with their own flaws and irresolvable internal conflicts.’

HBO has been instrumental in altering the landscape of television through its extreme content, compelling and unconventional storytelling, and well-rounded female characters. So next time you’re working through a box set of Mad Men, and your dressing gown is filthy, you’ve been eating pizza for three days and your pet tortoise is floating upside down in its aquarium, blame HBO.