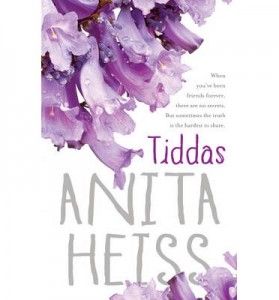 Anita Heiss, prolific author and Aboriginal activist, was in 2009 accused by columnist Andrew Bolt of being one of a group of ‘political aborigine[s]’: white people who claim to be black. Bolt decided that Heiss only identified as a ‘member of the Wiradjuri nation’ to nab top jobs reserved for Indigenous people (disregarding her high qualifications and hard work). Heiss took him to court and won: the judge ruled that Bolt had breached the Racial Discrimination Act.

The scenario prompted discourse about modern Aboriginal identity, and 2012’s Am I Black Enough For You? was Heiss’ response. Her memoir about what it means to be a Wiradjuri woman who grew up in Sydney cut down stereotypes, and disputed narrow expectations.

The author’s latest release, Tiddas, does this within a fictional format.

Released this month, the novel revolves around five best friends and their book club. Each of the women are on the verge of forty: Nadine is a successful yet jaded author, sarcastic and regularly drunk; Veronica, newly divorced with adult sons, has no identity beyond her family; Izzy delights in making self-focused career choices but falls pregnant; funeral organiser Ellen is proudly independent and has a weakness for tradesmen; Xanthe, who trains corporations in cultural practices, is desperate for a child.

With the opening line, ‘I’m pregnant,’ Tiddas bursts into our consciousness as being wholly concerned with the female experience. This is about the sisterhood of shared struggles: with relationships, with motherhood, with the family versus work debate, and with identity. The novel depicts the feminine vulnerability of voicing unmet desires and confusion, and the shared counselling of trusted friends.

Yep, with a couple of romances thrown in, this is classic chick lit. But the marvel of Tiddas is the superb dimension attributed to Heiss’ five main characters—three of whom are Aboriginal and all of whom are women.

Stereotypes are flipped; all the women are educated and living in comfort, and caucasian Nadine is the one with the drinking problem. I must be honest, I’m writing this review from a white perspective with only several Aboriginal friends throughout my life; my eyes were opened to real characters juggling Aboriginal heritage with modern values.

When Izzy imagines her mother’s reaction to her pregnancy, she knows she ‘would never approve of an abortion—not as a Catholic, not as a woman wanting more grannies and not as a Wiradjuri Elder conscious of the role women had in growing the mob.’

Similarly, we see Xanthe depend upon the wisdom of older women. ‘In her nineties, Noonie was the matriarch of their family…She quietly hoped the respected Elder might have some old ways of doing things that would help her and Spencer conceive.’

Tiddas’ importance is highlighted when Nadine is confronted about never writing blackfellas in her thriller novels. She replies, ‘I’d either have to make you the murdered or the murderer,’ voicing the limited representation of Aboriginal characters in Australian pop culture.

As well as exhibiting rounded characters, Heiss demands her readers get educated; almost every chapter has a book club analysis which centres on Aboriginal history and rights. This is a beautiful use of metafiction: through the casual discussion of these books, however brief, the reader learns.

The events in the novel also normalise and celebrate Aboriginal events, history and poetry. When considering a relative’s impact on the community, one of the women reflects: ‘Aunty Molly wasn’t just anyone; she was known as one of the Matriarchs of Mudgee; an activist and feminist, just like the Mudgee heroine of the past, Louisa Lawson.’

When Nadine’s family travel to Mudgee for a funeral, on the way ‘they stopped and took photos of Namoi River and a memorial in Abbott Street to Gambu Banuuruu, the Aboriginal warrior and leader of the Gunn-e-dar people.’

As well as giving due value to rich culture, Heiss acknowledges Australia’s shortcomings.

There’s white ignorance: ‘Even after the mainstream release of the film version of Rabbit-Proof Fence and Kevin Rudd’s national apology in 2008, she couldn’t believe there were still Australian who knew so little about their own history and still needed to be convinced of the value in saying sorry.’

There’s the tragedy of mining:’…the effects of the three coal mines raping the countryside could be seen from the street. Izzy was distraught seeing the guts of her land being ripped open, dug out, sold to foreign investors like something you get from the $2 shop.’

And there’s racism: people ‘…brought their stereotypes into the room and suggested she had to be poor, welfare dependent and uneducated to be Aboriginal. She was never going to fulfil someone else’s stereotype of being Black in Australia in the 21st century.’ This harks back to Anita Heiss’ legal battle with Andrew Bolt, and suggests that it’s an integral opposition that many Aboriginal people face.

Heiss, talking about her ‘Koori chick-lit’, declares that she writes positive stories of Aboriginal people to build ‘a bridge between black and white communities’. Tiddas does just that, depicting urban Aboriginal women in an easily consumable book.