books you should have read by now: In Cold Blood 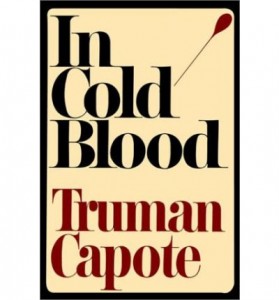 Truman Capote’s In Cold Blood is a classic because it’s one of the first non-fiction novels ever written. In its essence, a non-fiction novel tells a story the same way a fictional novel would, the only difference being that the non-fiction novel is true (or at least, largely so). It’s kind of an extended piece of journalism, and not like the non-fiction books which offer an argument or nuggets of analysis – it’s a complete retelling of an event.

In Cold Blood takes place mostly in a little country town in Kansas during the late 1950s and early 1960s. Four members of a well-regarded local family, the Clutters, are murdered at night in their home. The pair responsible for the Crime, Dick and Perry, are convinced that there is a safe in their house with lots of money. Turns out there isn’t – the two take only $40 away from the house that night.

Dick and Perry go on the run but are eventually caught, put on trial, and hanged for their crime.

The book starts off slowly, as classic texts so often do. It feels like a bit of a wall of text with long paragraphs and very few chapter breaks. It took me at least one long chapter to feel like I knew who was who. It’s good I was able to get with it though, in so many books if you at any stage feel a bit lost you’re kind of lost forever. Once I caught up, I enjoyed reading In Cold Blood.

By the last chapter, I was hooked. I read the final chapter in one sitting (which compares very favourably with my reading rate at the beginning). It debates the ethics of capital punishment and questions the justice of trials of this kind – where the accused cannot afford legal representation; where the jury had either known the victims or harboured prejudicial views regarding the case; where the defendants probably had themselves suffered from abuse, deprivation, and mental illness; and where the independence of the judge is in itself in dispute.

Capote spoke to Dick and Perry before they were hanged by the state of Kansas after his interest in their case was sparked from a tiny newspaper article. He interviewed them and came to know them well (indeed, one of them left Capote all of his worldly possessions, though they did not amount to much). It’s clear that Dick and Perry are the subjects of the book. Capote garners a great deal of sympathy for the murders, readers learn a lot about their lives. Little details as well, such as the desire for strawberry ice-cream for their last meals, humanises them deeply.

This isn’t to say that Capote is callous in his representation of the Clutter family. Capote talks especially of the girl, Nancy, the life she led, and the effect her death had upon her friends and her boyfriend. Mr. Clutter is positioned very early on in the book as a trustworthy, morally upstanding, and helpful man. Capote doesn’t focus on this much though. It’s easy to humanise victims of crime, people who are completely innocent and lived their lives in service of their community and loved ones.

Meanwhile, it is much more difficult to treat villains as humans too, and that’s what Capote achieves in this book. Regardless of what you think of their crime, of their trial, of how much having a disadvantaged background feeds into a tendency to commit crime, or of the death penalty, Dick and Perry are still people, not mere characters.

This is what makes non-fiction particularly tricky – it’s one thing to create a ‘bad guy’ in a fictional novel or film, but since no person is purely bad and comes with their own set of experiences and world-view at least in part shaped by those around them, it is dishonest to readers to present anyone as anything but a fully complex human being. There is a lot to learn from reading non-fiction about humanity. This is why In Cold Blood (despite early difficulties) is worth reading.