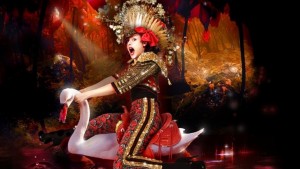 Bryony is 29 and has recently had her first STD check. Discovering that she has a common sexually transmitted disease, she embarks on a tour of her own sexual history, promising to make each sexual partner a piece of art in exchange for their response. She sends 35 emails, 14 facebook messages and 7 texts. The results manifest as Bryony Kimmings – Sex idiot.

Peppered with poignant moments of genuine expression for love lost and broken hearts, Kimmings takes the audience on a perilous journey of autobiographical performance art, song, poetry, contemporary dance, and some very intimate audience participation, delving deep, deep into her sexual past. This high energy, physical show is exhaustingly hilarious and unfolds as vignettes inspired by past lovers and the awkward experience of needing to confront them in this manner. Her quest to find the carrier of her Chlamydia morphs into a narrative about undertaking the project (Sex idiot) itself.

The assortment of costumes and props, haphazardly occupying the stage in suitcases, are used throughout the one-hour show and result in Kimmings appearing in various states of un-dress and dress-up that contribute to the underlying themes of sexuality and the female body. Her social commentary on British sexual culture is easily understood and its relevancy to an Australian audience was not lost on Kimmings who comments that her recent Croatian crowd was a little tougher.

A master of character with great physical and vocal control, the UK performance artist oozes feminine sexuality and is on a mission to make people laugh about it.

Captivating us with a 90s Yamaha keyboard that she can’t play and a very gory song about what she would do to her lover if she caught him with another woman, Kimmings exposes a masterful grasp on the English language and uses individual words, timed perfectly for comic effect. Kimmings’ improvised banter in amongst the vignettes proves she is not reliant on a script and is full of genuine quick wit.

Sex Idiot does not parade as a cautionary tale, but is an honest and very personal expression of female sexuality in the 21st century.

Bryony Kimmings is in Melbourne for 2 weeks and is well worth your time. A regular at the Edinburgh fringe festival, Kimmings has brought Sex Idiot to the Melbourne comedy festival this year. In addition to Sex Idiot, she also wrote and directed the highly acclaimed Credible Likable Superstar Role Model which showed at Theatre Works as part of the 2014 Melbourne Festival of Live Art (FOLA).