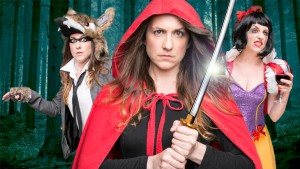 Welcome to the magical land where everyone lives after the fairy tale’s over. Jack’s done a few too many lines, Rapunzel’s expecting her tenth and Cinderella’s found out that The Prince bats for the other team and is more interested in her arse than her slippers of glass. It’s like Shrek rewritten by Alan Ball, except it’s an ensemble of one.

Slotted into the Locker Room at the Portland Hotel as part of this year’s Melbourne International Comedy Festival, Rama Nicholas’ one woman show, After Ever After, suffered a little from being in a cramped and underwhelming venue; the stage was tiny and the door opened to the ambient noises from the bar downstairs. Such is your lot as an emerging comedienne in a packed festival program, however, after ten minutes I was completely won over by Nicholas’ indefatigable enthusiasm. She swings manically between characters with the aid of a few props and costumes, a command of voices and a host of ridiculous and bawdy songs.

The citizens of Ever After are gripped with the drama of what will happen when The Big Bad Wolf is released from his twenty-year sentence for eating Grandma. Will Red Riding Hood get to meter out her justice and put her samurai training to use? Meanwhile, up at the castle Snow White’s gone rogue after one too many peeks into the Mirror On . cue a disaster of Red Wedding proportions. The pace keeps up as the plot unravels. Everything is not as it seems. Red and Big Bad are struggling between a desire to kill each other and just downright desire, while at the same time needing to thwart the evil Snow before everyone goes down.

The rollicking narrative is peppered with topical jokes- turns out Granny’s evil AND pro-Tony Abbott, and one of the dwarves came off the wrong end of St Kilda club party*. Nicholas effortlessly pulls everything together, rolling through flashbacks, a good dose of smuttiness and twenty or so characters. By the end everyone is in hysterics and the citizens of Ever After can live a little more happily.

Every so often Nicholas slipped, Big Bad ended up a little more Irish than Brooklyn and there were a couple of tech mix-ups. Rather than derail the show, it just made it clear that with a bigger set up and a little more support Nicholas would shine. Despite the make-do attitude and the constraints of a small venue on a busy night the girl is bursting with talent and charm. I can’t wait to see what she does next.