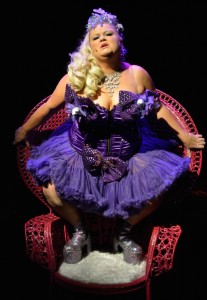 Showing from 27 May – 8 June at the Loft Theatre in Melbourne, Lulu McClatchy’s Supergirly: Return of the Pop Princess is a balance of crude potty mouth, raw Aussie humour and some pretty spot on observations about the popular music industry.

Supergirly tells the tale of Lulu McClatchy’s alter ego, Supergirly; an Australian girl seeking celebrity status and international pop stardom. Supergirly is not so much a superhero as she is a superstar, matching colourful sequinned dresses with some serious bling and glittery platform shoes to solve society’s popular culture problems.

With the assistance of her live in man-servant, A-list celebrity Bradley Cooper (AKA actor Lyall Brooks), the satirical songstress performed popular songs in a Weird Al Yankovic kind of way. Lorde, Lady Gaga and the Pet Shop Boys were just a few of the pop stars who were not safe from the shenanigans. There was also Miley Cyrus’ twerking, tongue poking and ‘sweaty vagina’ from sitting on top of a wrecking ball to consider, along with the threat of ‘pedo Mum’s’ who attend One Direction concerts under the guise of being their daughter’s chaperone.

It may sound like the show was a two hour backing CD with swear words and fanny jokes (don’t get me wrong, at times it was) but Supergirly had a surprisingly well thought out plot structure and even a twist, highlighting McClatchy’s skills as a writer.

The audience had a role in the show too, getting called on stage to be used as a prop or asked to take selfies with Supergirly and Bradley Cooper. The duo managed to engage the audience in a way that was fun and did not cause them to regret their seat selection close to the stage.

Underneath the elaborate costumes, excessive bling and feather boas, McClatchy is a wonderful talent with great expression and theatrical presence. Whether she was performing her versions of Katy Perry’s California Gurl or the Australian classic I still call Australia home, her amazing voice bounced off the walls of the small Loft theatre as she hit every note with precision.

Her partner in crime, Lyall Brooks (or Bradley Cooper in this case) displayed brilliant comedic timing and had an amazing ability to jump into a different celebrity persona upon Supergirly’s request.

What I loved about this show was its appeal to a wide range of age groups and audiences. For example, if you were a Mum when the Spice Girls ruled the world you would understand Supergirly’s grief on stage when she finds out the band has called it quits. However, if you were the daughter in this audience scenario you, like me, would have shed a silent tear reliving the loss of the Spice Girls, secretly blaming Geri for their break up too.

As you’d expect the character of Supergirly is, well, super girly, but this is not alienating. Her “occa” Aussie accent had the audience in stitches. That, combined with some references to Australian culture, the UK’s obsession with English celebrities and jokes about Australians and New Zealanders and you’ve got a show that you can take your girlfriend, boyfriend, best friend or Great Aunty Betsy to.

If you’re up for a laugh and want to surprise yourself on just how much useless knowledge you have about popular culture, then make the trek to Chapel off Chapel Street. After all, It’s not every day you see a naked Gotye, a cross dressing Bradley Cooper or witness a rendition of Lorde’s ‘Royals’ in a thick New Zealand accent, unless of course you are Lulu McClatchy.

One thought on “comedy review: supergirly”