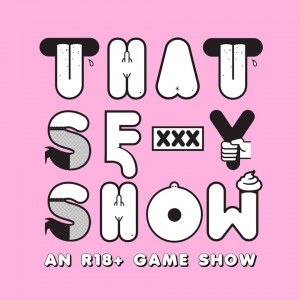 Just as the Melbourne International Comedy Festival departs, the cool change has come over and suddenly everything is looking a little greyer and a whole lot less funny.  Luckily for me, I was able to assuage the post-MICF blues and catch  the last performance of the MICF incarnation of That Sexy Show. Taking on the game show format the show pits team of sharp minded sexperts against each other to unravel everything you ever wanted to know (and some things you didn’t need to know) about getting down and dirty.

TSS is headed by the sparkling Sarah Jane Haywood, flanked by her two team captains, Geraldine Hickey and Adam Knox. Inviting a changing cast of guests into their ménage-à-trois, the show rollicks along through a few rounds of uproarious games.

The show is explicit and may not be for everyone, but I had a great time. It doesn’t hold back and more importantly doesn’t exclude anyone, yeah there’s a straight white guy up there but he’s happily among a group of people scattered along sexuality spectrums. The team do a great job of making the guests comfortable, which pays off. Everyone opens up with their own super embarrassing, riotous and hilarious sexual misadventures, leaving the audience to ponder just how bad it would be to mix up Srichacha Sauce and lube. How, even?

Although That Sexy show is done with MICF it pops up around town now and then to bring sexy back to the good burghers of Melbourne. Check out their Facebook page to keep abreast of their whereabouts.