Women’s crime writing has come a long way, but it hasn’t been smooth sailing. Like walking in high heels, there have been moments of comfort and ease, and  a stumble here and there and the odd blister.

But central to the ongoing success of female crime authors is the support of fellow writers, providing an arm to lean on to prevent those stumbles when a stiletto heel gives way.

An opportunity to experience this support and celebrate women’s crime writing is The Death in July Festival of Women’s Crime Writing, thanks to Ballarat Writers Inc in partnership with the Sisters in Crime organisation.

One lady who is looking forward to the festival – and is also giving the keynote address – is Australian crime writer Angela Savage.

The author of three detective novels set in Thailand and starring Australian teacher Jane Keeney, Angela never actually set out to write crime fiction at all. Not unlike her main character, she fell into it accidentally.

‘I’ve always enjoyed the genre. Then, the more I got into it, the more it struck me as the appropriate vehicle for the kinds of ideas I wanted to explore in my writing,’ she explains. ‘I was particularly interested in what happens when cultures collide. This can create a lot of tension and a lot of drama but also a lot of humour.’

The six-and-a-half years Angela spent working in Southeast Asia also inspired the setting for most of her work to date. The exception to which was her short story The Teardrop Tattoos, which won her the Sisters in Crime Scarlett Stiletto Award in 2011 and was set in her own suburb. 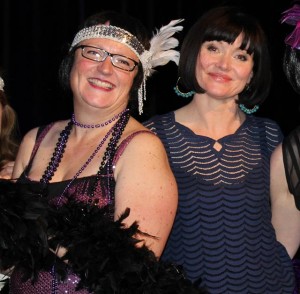 The Scarlett Stiletto Award, so named not only for its coveted first prize trophy – an actual bright red stiletto shoe, mounted on a trophy base – but perhaps because it embodies all that women’s crime writing is: edgy, sexy and eye-catching.

In the 20 years of the Scarlett Stiletto Awards, Angela is one of a whopping 17 female crime writers who have won in various categories and gone on to become published authors.

‘That’s a pretty solid statistic,’ Angela says. ‘On the one hand, [Sisters in Crime] help to convince publishers that there is a market for women’s crime fiction and, on the other, I think things like the Scarlett Stiletto Awards and the author events that they host give women the confidence to try.’

In fact, women’s crime writing as an industry has progressed in leaps and bounds over the past few decades as well.

‘We’ve come a long way, baby!’ Angela laughs, when asked about the changes to the domain of women’s crime writing. ‘What other industry has seen a 10-fold increase in the past 13 years? None spring to mind.’ The increase she refers to is based on a comparison between the number of books eligible for the Davitt Awards when the awards first began in 2000 (7 books), and the number eligible in 2013 (76 books).

Nonetheless, Angela does agree there are still challenges for female crime writers, such as work-life balance. ‘There’s still gender bias in literary coverage,’ she adds. ‘But I think we certainly no longer have to argue for our place at the table when it comes to crime writing.’

Perhaps women’s crime writing is not that different to men’s. But is it better? This age-old question will have to wait for the festival to be debated. And debated it most certainly will be with a panel of writers, male and female, each there to defend the honour of their sex’s capacity to write crime fiction.

This is just one of many features crammed into the day-long festival.

Other highlights include a display of the Blood on Ballarat collaborative short story, a launch and signing of Ellie Marney’s new book Every Word, and a discussion panel on the direction women’s crime writing is taking, cleverly disguised under the title Gum Shoes or High Heels? You can also enter the Murder at MADE competition by submitting your own original crime fiction short story and be in the running for prizes.

A stellar line-up of festival guests including a multitude of outstanding female crime writers as well as a few brave male ones will make it hard to choose what to attend. In the end, it’s probably best to go to everything, particularly to receive the confidence boost which the atmosphere of such a festival is guaranteed to provide to any writer.

Angela agrees. “You feel supported and encouraged to keep going through those moments of self-doubt which we all obviously have and deal with on a daily basis,” she says.

“And there is an avid dimension to regional writers’ festivals. I’m hoping that, by being in Ballarat and raising awareness locally, more women from regional Victoria will also be encouraged to have a go at writing crime fiction and entering the competitions. It would be lovely if that were a result of the festival.”

We couldn’t agree more, Angela! So, get those high heels ready ladies; fun times ahead!

One thought on “death in july: festival of women’s crime writing.”