double denim: in defense of 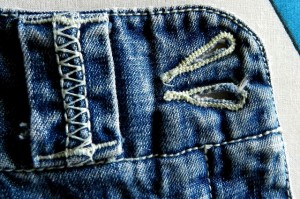 In this article we will be tackling the age-old question: is it acceptable to wrap your legs with denim and subsequently wrap your arms with denim too? I am here today to tell you, abso-fucking-lutely. For those of you who have already tuned out after reviewing my hyphenated proclamation, adieu and best of luck to you and your non-denim related endeavours.

Case in point to those of you credulous enough to give my hyphenated proclamation the chance it deserves is the denim-clad vixen that could perhaps be labelled as a pioneer of the denim-clad vixen movement. For those of you who are experiencing feelings of the concupiscent variety and are not familiar with this denim-clad vixen, she is none other than Deborah Harry. Front woman of 1970’s rock band Blondie who rose to fame and glory in the new wave and punk surroundings of CBGB’s.

What we can fathom from this signature style of high-waisted jeans meets cropped denim jacket is that Debbie effortlessly combines cool sexuality with streetwise panache. The dexterous achievement on Debbie’s behalf stole the heart of the entire world and the bottom few inches from the pants of the undeveloped whippersnappers of that era and by gum, she knew what she was doing. In the immortal words of additional 1970’s fox Cherie Currie, ‘I’m sweet sixteen and a rebel queen, and I look real hot in my tight blue jeans.’

Rest assured denim demons, it is not as simple as wrapping your graceful lady arms and ample lady derrieres in the sturdy cotton twill textile known as denim and suddenly morphing into Deborah Harry. There are some definite do’s and don’ts of the prospect. Rule number one is possibly the most important rule of all. Britney Spears and Justin Timberlake broke this first and foremost cardinal rule at The Shrine Auditorium in 2001 and I’ll bet my bottom dollar that you’re already full aware of what I’m referring to: don’t overuse one particular shade of denim. The denim handbag and denim cowboy hat that they exhibited on this historic day fourteen years ago have only added insult to injury.

Rule number two is as simple as this: I would highly recommend reading rule number one again, just so we’re clear. Case in point to those of you foolish enough to believe that perhaps Justin and Britney were merely victims of their time is the reality that 2001 didn’t dress them, they did.

Ladies and gentlemen of the jury, Ashley Olsen has been accused of a heinous crime, a crime so heinously untrue that it caused me to use the term “heinous” to begin with. Somebody, presumably a jerk, has the audacity to think that her choice to wear a fitted denim shirt tucked into fitted black jeans isn’t a timeless style that Deborah Harry originally sported in the new wave and punk surroundings of CBGB’s. Don’t allow that jerk to inflict their jerk agenda of not effortlessly combining cool sexuality with streetwise panache onto those of you credulous enough to give my initial hyphenated proclamation the chance it deserves.

If you’re sold on my proclamation, and you damn will better be, I suppose you’re going to want some suggestions as to a retail outlet that will assist you on your newfound objective of morphing into Deborah Harry. Anybody who appreciates the aesthetic of jeans looking as they’ve been spray-painted on should pay Dejour Jeans in Brunswick a visit. You may want to set aside a few hours prior to this visit, because you’ll be pulling, tugging and sweating up a storm before you find that perfect fit but at $50 a pair you can’t go wrong. Subsequently, you’ll need to enquire if one of the sales assistants is willing to move in with you so you can pull them on and off. It’s a two-man job.

I will conclude my argument with a proclamation to a company who has been on my side of the double denim debate since 1853. Levi’s Strauss & Co. Levi Strauss invented blue jeans, consarnit. We owe him everything. The innovative brand has been putting denim on the top and bottom half of people for over 150 years so if you’re still foolish enough to believe that this particular style isn’t something you’d be interested in, take it up with history.

Yesteryear has delivered us modern-day saps a large number of subsidiary resourcefulness such as the one-wheel motorcycle, the piano doorbell, pizza scissors and the radio hat. Above all else, centrefolds of yesteryear and centrefolds of nowadays have demonstrated how to perfectly pull off the art that is wearing a fully denim outfit. Is it acceptable to wrap your graceful lady arms with denim and subsequently wrap your ample lady derrieres with denim too? Abso-fucking-lutely.