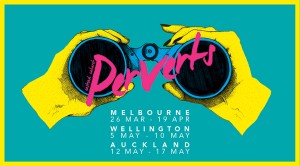 The words ‘DANGER WANK’ are firmly on repeat in my head and I can definitely blame EastEnd Cabaret for that. Their new show Perverts, part of the Melbourne International Comedy Festival, offers many such couplings of filthy thoughts and deeds which perhaps never should have gone together, but thanks to these two smutty songstresses, it’s much too late for that.

Necrophilia, ‘ping pong’ skills, suicide pussies and two headed Man-beasts are all a part of this colourful, very un-PC look into the depraved world of the diva Bernadette and her multi-talented accomplice, Victor Victoria.

If you’re faint-hearted or easily offended it’s unlikely you’ll make it past the first five minutes as these lewd ladies serve up comedy cabaret so crass it’d make the 13 year olds on 4chan blush. And word of fair warning—these two are very heavy on crowd participation of the man-handling (literally) variety. I recommend not coming with a jealous partner, with your parents if you still can’t joke about sex, or if you are not at least prepared to cope with the possibility of being straddled, cajoled or caressed.  So too it must be said—steer clear if you don’t understand the difference between the intelligent parody of over-sexed stereotypes and invitations to be creepy. One audience member in the session we saw tried to take proceedings a little too uncomfortably into his own hands, but he was quickly and deftly dealt with and the show proceeded without a further hitch.

I adore EastEnd Cabaret—I’ve seen them before and was concerned I may have built them up too much in my memory, but they absolutely exceeded my expectations once more, and I left feeling slightly unwell from laughing far too hard for too long.

I dare you to check them out so that you too might be kept up all night with ‘DANGER WANK’ ringing through your happy little ears.