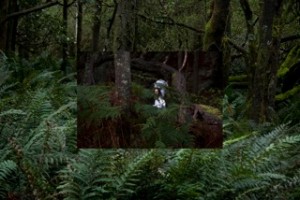 Originally from Canberra, Elly Freer is a Melbourne based photographer who’s work is currently showing at Canberra’s PhotoAccess, as part of group exhibition, At a Loss. Also featuring the work of Dean Butters (exhibiting artist and exhibition curator), Aimee Fitzgerald, Evan Baden and Emily Jackett, At a Loss explores the intersection of identity and space.

Freer’s work in the exhibition, Hanging Rock, is influenced by the gothic imagery presented in the seminal Australian film, Picnic at Hanging Rock, and how the film uses the landscape as a starting point for deeper investigations about gender and gendered spaces.

Jess Oliver caught up with Elly Freer to learn more.

Hi Elly, great speaking with you! Can you tell us a bit about your background as an artist?

I studied photography all the way through high school and college before graduating with a BA (Photography and Media Arts) from ANU. Since graduating, I’ve exhibited in Canberra predominantly with my travel/street photography and self-portraiture in group shows.

I moved to Melbourne in 2014 and launched the creative arts website Red Magpie with a writer friend, Georgia Kartas. I’m really enjoying exploring my new surroundings and, when I’m not working or photographing for the site, I’m roaming around the Victorian bush with my dog and my camera.

Honestly, I’m a train-wreck when it comes to process. Inspiration for a shoot hits me hard and fast and everything else in my life falls apart. I follow the same pattern like clockwork: the first stage is shooting, which takes the most time but is the most enjoyable, and I’m usually still workshopping as I shoot as the visuals play a huge part in shaping my work.

The next stage is selecting images and editing on my computer/drinking 10 000 cups of tea/marathon procrastination cleaning efforts. I then descend into a sheer stress-panic that results in a self-indulgent tantrum and the decision to quit art forever, which is followed by a sheepish return to my final edits and, ultimately, sending my photos to the printer.

What drew you to photography as an art form?

My first camera was a plastic Bananas in Pyjamas film camera I got in a showbag at The Canberra Show. I was 10, and I took it with me everywhere I went. I think I was initially drawn to it because, like many photographers, I’m very socially anxious, and I was painfully shy as a child. The idea that I could capture these people I met and spaces I occupied, and be able to process and study them later when I was safe and comfortable at home, was an introvert’s dream. I’m such a visual person that I find photography to be the form of communication most natural to me.

Do you identify as a feminist, and if so, how does if inform your practice and work?

Very much so. I’ve always identified as a feminist but it wasn’t until the current wave of feminism, happening at the moment, that I really stopped to think about what it actually means for me.

I started seeking more information, discovering the stories of a variety of women and people who identify as women (or don’t), especially the stories of women of colour as well as trans women, and I realised that feminist discussions and discourse were bubbling up all around me. While so much of what I discovered was deeply depressing (especially the comments section of any major publication), it also proved so eye-opening, and so important.

The best part of feminism is seeing all these strong, intelligent, badass women telling their own stories of pain and empowerment, and it really inspired me. It helped me start to explore my own experiences.

Previously, I’ve explored ideas of self-identity and femininity in my self-portraiture, but this is the first work I’ve created from a more focused feminist viewpoint.

In At a Loss, you share the exhibition space with four other artists, each with very distinct practices, how do the works speak with one another?

It’s such a varied show, which is fantastic. Dean’s done a great job of putting it together.

I think there are certain threads that connect the works together, such as recurring themes of space, occupying space (both online and physical), memory, womanhood and photography’s role in exploring the self and self-identity. 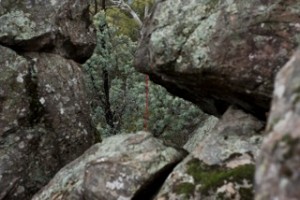 Hanging Rock, investigates ideas of gendered space, particularly the female body in public (male) space, can you tell us a little more about that?

Being cis-gender and white makes my life much easier and safer than it is for so many other women, yet one of the things I really notice as a universal truth for women is our complicated relationship with space. Questions around how or when women are allowed to occupy space, whether physical, emotional and/or conversational, reoccur.

In this work I explore the idea of feeling like a guest within space, expressing feelings from unease through to terror, as well as examining the idea of the body within that space and how that changes the reading of both the space and the image.

Do you have any thoughts on the different experiences cis-gendered and trans-women have in public spaces? What do you think is different, and what are the parallels?

I’m cis-gender, so it’s impossible for me to speak to the experiences of trans women. But I do know that it’s a much harder experience for them. From what I’ve read there seems to be at best a disregard for politeness and privacy, and at worst intense hostility and violence. Even hostility within feminist spaces.

How have your own experiences informed the work?

The space issue has been discussed so much (and much more eloquently than I am able to) At first, it was something that I didn’t really consider; I knew I felt unsafe alone at night and that I was afraid of men I didn’t know. It wasn’t until I started actively noticing little things that it really struck home – things like counting the number of times I’m interrupted by a man compared with by a woman (spoiler alert: it happens a lot more with men), sharing workspaces with male colleagues and the striking difference in their interactions within that space, and their comfort in taking up that space with their body or belongings, compared with the women at work.

I love that your work incorporates gothic imagery, can you tell us about the role this imagery plays in creating a sense of unease?

I’ve always been drawn to horror and gothic imagery, and I love Alfred Hitchcock. I think the Australian landscape is perfect for creating a sense of unease; there’s such an incredible tension between being awe-inspiring and beautiful on the one hand, and threatening and isolating on the other. I also wanted my work to show how a very personal environment can suddenly become unfamiliar and dangerous, particularly for women – for example how a street by your house that you walk every day, suddenly for women, at night, becomes a terrifying reminder of danger and an associated intense awareness of your own body.

What do you think about the distinctly Australian gothic imagery presented in A Picnic at Hanging Rock? And is this reflected in the work?

I started this series while contributing to a Zine: ‘Australian Gothic’, created by Raphael Kabo, that was a collection of Australian Gothic poetry, and I just knew straight away that I needed to shoot at Hanging Rock.

Hanging Rock is one of those films that has haunted me ever since I first saw it. My mum worked at the National Film and Sound Archive while I was growing up, and I remember watching it by myself in a tiny booth while waiting for her to finish work.

The film’s imagery has that great gothic combination of the beautiful and the unsettling. I like the way Australian Gothic imagery is less centred on the supernatural, more concerned with the terror of the familiar and the ordinary.

I also liked the interplay between the landscape as being traditionally female and yet, in the film, the rock is mostly regarded as male, and so it plays with how women interact with the landscape – zombie-like with enticing curiosity as well as intense ill-feeling and fear.

At a Loss is showing at PhotoAccess until 20 September, 2015.

For more of Elly Freer’s work, check out her website.

One thought on “elly freer: interview”