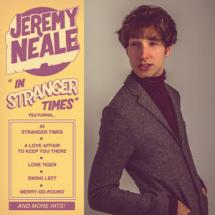 Brisbane born Jeremy Neale has succeeded in delivering a catchy, vintage-tinged EP. In Stranger Times is a concoction of tunes constructed to make you crave a rebellious lifestyle and will surely be a summer hit.

‘Do Do Do’ is the EP’s opener and it instantly sucks you in with a simple, surfy beat running throughout the song, complemented by rough guitar progression and Neale’s charming vocals. Sliding smoothly into the single ‘In Stranger Times’ –  featuring backing vocals from smouldering Aussies Go Violets –  the EP doesn’t stray far from the nostalgic pop theme. Although it becomes clear early on that many of the tracks are quite similar, it’s Neale’s ability to write a catchy melody that acts as the hero throughout.

‘Lone Tiger’ begins with a vocal melody that is closely mimicked by the guitar, but does produce a bit more variety than previous tracks, with changes in layering and rhythm –  taking the mood down a notch without clearing the dance floor. ‘A Love Affair To Keep You There’ holds pace, highlighting the young singer’s misfortunes and heartbreaks, which seem to be consistent themes throughout the EP. Dynamically, there isn’t a strong sense of light and shade overall, as ‘Melody Go Round’ doesn’t really offer anything new with rhythm and block chord progressions as seen previously.

Having said that, closing track ‘Swing Left’ is immediately unique. The track breaks up the sense of repetitiveness without veering too far from the main concept of In Stranger Times. Featuring keys for the first time and showing off another dimension to Neale’s vocal ability, ‘Swing Left’ is definitely the gem of the EP.

Jeremy Neale absolutely deserves a nomination in Triple J’s Unearthed Artist Of The Year competition and though repetitive in places, In Stranger Times shows us that he’s in with a shot.

One thought on “ep review: in stranger times, jeremy neale”