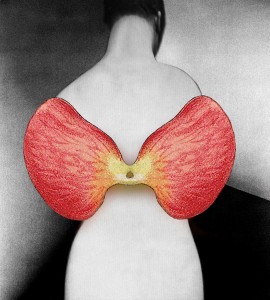 Pat Brassington creates a miasma of unusual images, sometimes carnivalesque or puppet-like and at other times stretched or contorted human forms. There is always a hint of lusciousness, or a just-out-of-reach intimacy in these representations of beings and ideas that are more complex than a single image can hold. The artist’s stretched and changed reality has been informed by surrealism, which in his 1924 Surrealist Manifesto, Andre Breton describes as “based on the belief in the superior reality of certain forms of previously neglected association, in the omnipotence of dream, in the disinterested play of thought.” Brassington takes this interest in unusual associations and play with imagery to create her beguiling and beautiful artworks.

Brassington is currently presenting a self-titled exhibition at Sydney’s Stills Gallery. As one of Australia’s most respected and influential photomedia artists, Brassington rose to prominence in the 1980s and her widely acclaimed work spans across several decades. The current exhibition presents work from her series In search of the marvellous (2013) alongside a selection of more recent works. These works feature forms that are ever so slightly off kilter, a leg stretched too long, a mouth obscured from vision. Whilst Brassington’s manipulations of images are obvious, her subject matter remains subtle and finely crafted.

Particularly interesting in this exhibition is Brassington’s play with human forms- visible and obscured faces and limbs draw attention to the ideas of the seen and the unseen. In Pansy (2013) a woman’s mouth is covered by a flower, or in Hairy One (2013) a figure sits with hair draped across his/her face, obscuring all individuality from the viewer. These playful creations at times feel imbued by innocence, and at other times seem intrinsically sexual. In Pansy, the woman is leaning forward, eyes fixed on something out of sight, while the flower is held still and dissects her face. Its placement, covering her mouth and nose, feels simultaneously restrictive and releasing; perhaps it is blocking her from speaking and breathing, or perhaps it is an image of delicate femininity or sexuality, through which she is allowed to speak and breathe.

Flower imagery is present throughout the exhibition and is symbolic of a range of ideas that seem to develop in Brassington’s work: femininity, growth, and sexuality. Quiescent (2014) features a black and white image of a woman’s back, from which emerge two red and yellow flower petals, their shape allowing them to look almost like budding wings, forming slowly as the woman looks the other way. Brassington has said that she found analogue photography restrictive to her practice and that digital photography has opened up possibilities for manipulating and playing with images. It is easy to see how this would be true for the kind of images she is seeking to create; Quiescent suggests a wistful emergence from a hidden figure, whose uncanny contradictions can be created through photomedia manipulations.

Brassington is known to disapprove of critics who have “lazily”, or reductively, labelled her work as “unsettling” and “disturbing”. Yet, it is true that they are not images that sit easily or comfortably. It is their implied resonances beyond their frame that create this disturbance, through a disruption of the norm, and through carefully constructed encounters between separate objects. Yet, as much as it is true that Brassington’s artworks can be unsettling and disturbing, they feel equally imbued with curiosity, wonderment, and a questioning of the fabric of reality.

Pat Brassington is showing at Sydney’s Stills Gallery until August 16. Entry is free.