a movement in the making: vamff contemporary designers

Recently, The Wheeler Centre hosted Fashion Critique: Fact or Fiction?, a panel proposing that while social media has increased the public’s steady obsession with fashion, via the frenzied one-click sharing that turns a designer from unknown to ‘must-have’ overnight, the online conversation has not increased the serious critique of fashion as a cultural position or product.

While I unfortunately couldn’t attend the panel, the theme of the discussion stuck in my mind. Coming from a visual arts background, you are taught right from the beginning of your career to fear and respect critique. You are painfully aware of the historical canon of criticism housed in countless lengthy, difficult books that will all be thrown your way if you make one false move.

Designers on the other hand must fear the consumer, for they live and die by the stroke of the mighty credit card; cultural critique need not be of great concern as academic ideology rarely influences fashion trends in real time. Its effect does ripple out however. Most recently, consumer backlash against the wearing of items such as Native American Indian headdress as an accessory item is indicative of the consumer catching up with understandings on inappropriate cultural appropriation. This use of culturally specific patterns, ceremonial pieces, and symbolic objects as largely Western-centric high fashion items is widely panned as the type of stealing we know empties oppressed cultural symbols of their meaning, turning them instead into Western Decorative Motifs.

But this is incredibly murky territory in fashion terms. Last week I struck up a dialogue on Instagram about a Discount Universe drawing competition posted on the popular photo sharing app. Discount Universe is a Melbourne-based label experiencing huge success for their highly sequinned faux-punk style outfits, donned by the likes of the hyper-industry American stars Miley Cyrus, Katy Perry, and Ke$ha, to name a few. The discussion went as follows: 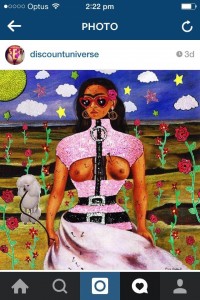 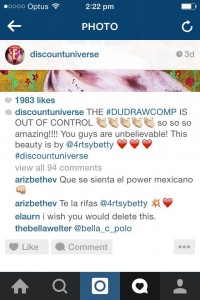 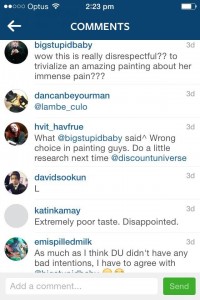 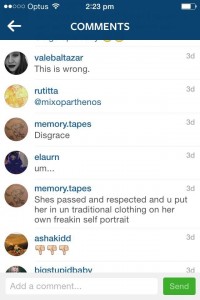 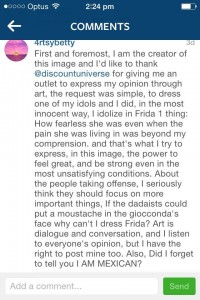 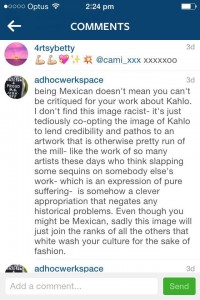 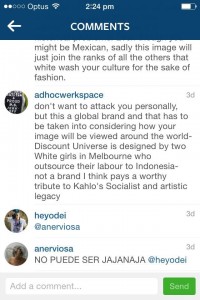 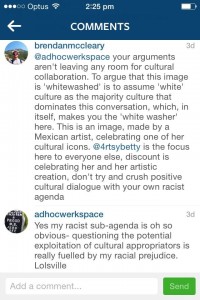 While it would be easy to dismiss @brendanmccleary as just some guy on Instagram, his attitude is typical of the seemingly over-arching belief that we should ignore the political and social responsibilities of fashion brands.

Despite the many complaints about the image, the 1.983 ‘likes’ from other Discount Universe followers is by default wielded as a kind of silent majority voting system that says this image is ‘ok.’ It lends weight to @brendanmccleary’s flippant claim that I have a ‘racist agenda,’ because compared to almost 2,000 likes, twenty or so people expressing a problem can easily be shut down in a ‘haters gonna hate’ attitude.

The affect this has is clear — I reply snidely and flippantly to the claims I am racist because I know from experience that a genuine dialogue is pointless, and Discount Universe have still not bothered to comment because nobody will make them. Discussion over.

The antidote to this empty exchange, however, is that I actually came to be writing this article from the hyper-delighted need to discuss three of the runway shows I saw at VAMFF this week: Perfect, Nixi Killick, and The Social Studio Block Party.

The three shows epitomised everything that can be right with fashion if designers choose to find innovative ways to develop their brand conscience. All three events pushed the audience to consider the body as a politically charged site of expression, rather than the substance-less clothes rack fashion tends to tell us we are.

First up, the Perfect Runway, produced by Ten Fingerz, brought together an astonishing array of emerging designers to represent their utopian fashion-conscious community, where performative aesthetics, subversive play and self-acceptance are the main agenda in wearable identity. Taking place on a huge set of pink stairs sourced via Gumtree, the fashion was interspersed with skits, a beauty pageant, and runway offerings that pushed the boundaries of culturally acceptable beauty and body norms by The Akira Wearable Art Group, Rose Chong Costumiers and co. Highlights for me personally were Goo Life, Fizzy Fingers and the Lunasea project Stitch Witch. I do recommend that you follow the link to all the incredible creations that were on offer, because it was all unique and impressive.

On Saturday I attended The Social Studio Block Party, which wore its politics well and truly on its sleeve. In their own words, ‘The Social Studio [aims to use] fashion and creativity as a vehicle to create employment and education opportunities for talented youth from humanitarian migrant backgrounds.’ They demonstrate how sharing an aesthetic can be used to strengthen and enliven a community, proving they needn’t be a-political to do so. I watched a beat-poet Welcome To Country that brought me to tears, and it was only just midday. A plethora of emerging designers sent their creations out on models that were bursting with a refreshingly self-aware attitude, many of whom adopted the typical blank model stare before later breaking playfully into Reggaeton dance-style catwalk steps. This was significant because Reggaeton is the musical genre that inspired the sandungueo style of dance, which later became known as twerking in the USA. Finding popularity in alternative dancehalls in New Orleans, it found its way to global pop consciousness through the antics of Miley Cyrus. As mentioned earlier, Cyrus is a huge fan of fashion faux-subversives Discount Universe, and thus the self-fulfilling circle of White-cultural appropriation artists closes once more.

Lastly, to Nixi Killick’s new collection. I’m a huge fan of hers, in particular of the effort she puts into promoting what she calls the ‘colour tribe.’ Nixi, more than most designers, gives an incredibly rich conceptual focus to her work, which she describes as techno-optimistic Imagineering. Her artworks form the basis of the complex fabric design that in turn becomes the backbone of her experimental construction techniques, referencing a futuristic aesthetic that Killick is well on her way to making happen. Both she and her designs radiate positive energy, and her community is a testament to this. Not coincidentally, the huge team (both on and off stage) that put on the Perfect Runway, Killick and their posse of passionate cultural contributors, like fashion blogger Lexi of femmeasfuck.tumblr.com fame, are concentrically aligned. This is a local performance-focused community who are all moving around, within, and towards an experience of fashion as a way to promote a gender-fluid, semi-spiritual new aesthetic, which provides both a refreshing ethos and a context to all of their playful, often kawaii-esque antics.

I think it’s safe to say that Melbourne is experiencing a radical shift toward positive self-expression, being propelled by a righteous group of women who wear both their hearts and their politics proudly. I hope the outspoken visual and verbal attitude of these three fantastic shows filters out to the broader fashion community and convinces them to put their politics where their money is.