in brief: australian fashion week criticised for ‘too thin’ models 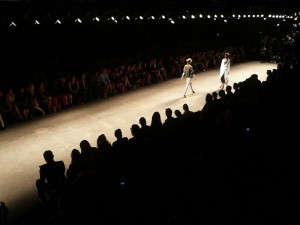 The fashion industry has been long criticised over the use of unrealistically thin models and this year’s Australian Fashion Week has sparked debate once again on this issue.

Dubbed ‘the Hunger Games’ because of its incredibly slender models, audience members worried about the health of the young ladies in front of them.

Carla Zampatti’s show on Sunday night started the uproar and Alex Perry soon followed with models even skinnier than Zampatti’s. Jackie Frank, editor of Marie Claire was so concerned she rang one model’s agent. The agent, who is apparently living with the model, has reassured Frank that she most certainly eats and does not have an eating disorder.

The pressure on the young models is huge and it’s hard to tell which models are naturally thin and which may be suffering from eating disorders. Certainly criticising them publicly is not the answer and only creates negativity.

Alex Perry has since apologised for using former Australia’s Next Top Model contestant Cassi van den Dungen saying it was a ‘serious lapse in judgement’.

The 21 year old has posted photos of food on her Instagram to prove she does eat. However, the food was all untouched which sparked more debate.

2 thoughts on “in brief: australian fashion week criticised for ‘too thin’ models”