in brief: will a plus size fashion week end prejudice against larger women? 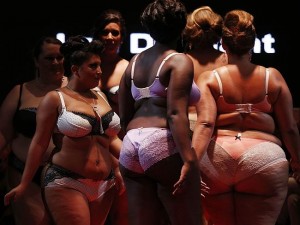 In an industry based on an ideal perception of femininity, a French fashion organisation is seeking to alter society’s perceptions of that image to include more ‘real’ ideas about women and women’s bodies.

Paris-based fashion group, Histoire de Courbes, has launched the first ever fashion week for plus sized women. The organisation is known for celebrating what it refers to as ‘voluptuous women’, aiming to showcase sizes beyond what is traditionally shown in high fashion.

The runway, named ‘Pulp Fashion Week,’ in order to capture the essence of its French derivative ‘luscious fruit,’ showcased a variety of fashion houses including labels such as Forever 21 and ASOS Curve. All the garments were aimed at women of larger sizes – a far cry from the current trend of size 0-8 models being used in most other fashion events.

Given the continuous debate about fashion sizes not representing the ‘average woman’, such a move would be welcomed by many and prompts the question as to whether the industry will ever be able to change and step outside its constricted ideals.

At a time when comments such as those espoused by Karl Lagerfeld are still rife, it appears it will still be some time before all healthy body types are equally venerated.