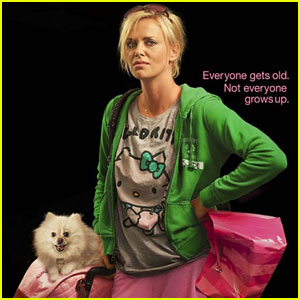 It’s not that I don’t know how I feel about Charlize Theron’s Mavis in Young Adult, it’s that I don’t know how I’m supposed to feel. The cinema-going audience for the film seems to be divided; there are those who loathe the character and applaud Diablo Cody for putting such an abrasive figure on screen, and those who love her for being so unlikeable. Subtle difference.

The latter group tends to involve more feminists. But I don’t know which reaction is correct. Before going in, I thought that I was supposed to hate her and would end up loving her. Yet the love-the-hate/love-to-hate relationship is unsettled by some of Mavis’s less hyperbolised, more human traits. She embodies a few of the things that we might want to achieve as adults, forcing the question of how much should we scrutinise, and how much should we sympathise?

Personally, I couldn’t love Mavis. Feminist blog Bitch Flicks came out in support of her for being an unlikeable female character at a time when anodyne niceness is the ‘personality’ du jour. But so much of Mavis’s dickishness is perpetrated for the sake of lowering herself for a man. She fulfills the basic qualities of the villainised other woman – focused on career rather than family, a heartless homewrecker, a woman hater – but without even having a man who we can suggest should have equal blame put on his shoulders. Former flame Buddy (Patrick Wilson) steadfastly refuses her advances.

Further, Mavis is a writer. A successful one, although technically ghosting for the well-known creator of a young adult series. But, like Our Idiot Brother, which trivialised the careers of Zooey Deschanel (Natalie, comedian) and Elizabeth Banks (Miranda, journalist), Young Adult makes it clear that Mavis is actually dreadful at her job. Her writing is trite, when she actually does it, and filled with the clichés that make us all bond over how awful Twilight is. On numerous occasions we see her poaching ideas from the mouths of doey-eyed teens.

But there were elements of Mavis’s life I related to easily. The wakin’ up, swiggin’ Diet Coke scenes early in the film are scarily reminiscent of my own life, and I resent the subsequent judgment. This leaves aside the entire moving-to-the-big-city-to-become-a-writer plot line. There’s more going on in Young Adult than meets the eye. Mavis isn’t just a homewrecking bitch, or a substandard writer – those are just the elements the plot focuses on. The bits it skips over are the psychological reasons she might be doing this shit now. Mavis is a depressed alcoholic who has recently gone through a divorce.

We’re asked to believe that her actions are the result of never having grown up. That she has spent the past 20 years pining for the halcyon days of high school, but much of her time in the interim seems to have been pretty sweet. She found a love beyond the po-dunk town, she established herself as a writer – enough to make a decent living out of the profession – and she has female friends. We meet one of them in an early Bechdel-passing scene.

What we see in Young Adult is Mavis at her worst, and I found it heart-breaking. It felt to me like the worst parts of her life had all congealed into a breakdown which caused her to regress 20 years, not like she’d been living back there all that time. If nothing else, why would someone so apparently shallow wait until their beauty was fading before wagering stakes on its lure? Her issues are shrugged off by other characters in the film and her self-medicating is facilitated. Maybe Mavis is as big a jerk as she was in high school… or maybe she grew up, had a crisis, and was returning to the scene of her glory days in desperate need of help. In return, she was treated as a girl who cried wolf. They expected a heartless harpy, and they got one.

The film’s ending is as ambiguous, with Cody and Reitman’s wit-needle tapped into a vein of sarcasm and insincerity. If you believe the arrested development line, and take Mavis as the ageing prom queen bitch of the film’s outer layer, a half-hearted ‘You go, girl!’ speech from a secondary character might seem clue-ily referential. It’s delivered after a climactic comeuppance and suggests all is right in movie land. But the happiness—justified or no—of some of the townsfolk, jars with the sentiment that they are fools.

Either we should cheer Mavis for getting out, or be excited by the future hardships she’s sure to endure by failing to learn her lesson. But I’m not sure which Cody was intending. Further, the slacker take on ‘conclusion’ left me worried about whether Mavis will seek help for her problems. Is she, without the film saying so? The lifting of her writer’s block might suggest she’s seeking help beyond the frame. Rather than trying to make a comedy about a woman’s depression and alcoholism — which I believe is an achievable feat—Young Adult trivialises its antiheroine and suffers comedically for its attempts to graze over the issues. I sympathise more with Mavis because she is made so unsympathetic, but it seems the bulk of the audience missed this.