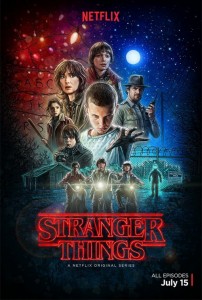 As 2016 comes to a close, Lip’s film writers share their screen highlights for the year. Unsurprisingly, Netflix is well-represented – perhaps more interestingly, no one chose a film they had seen in an old-fashioned cinema. In 2016, it seems that TV and streaming reigned supreme. What were your favourites? Let us know in the comments below.

In just 100 or so words, I cannot begin to explain the plethora of amazing twists and turns that I love, love, loved about Netflix original series Stranger Things. So let me instead take this opportunity to gush about Millie Bobby Brown’s fabulous portrayal of Eleven. All of the child actors in this 80s style horror are brilliant, and their friendship filled me with childhood nostalgia; but the character of Eleven remains supreme. This series has taken the character of a vulnerable young girl and given her so many complexities and strengths.  I openly wept and wept by the end because of how Eleven was able to be so strong and at the same time so fragile. She is not just innocent or an object of fear and because of this I think Eleven signals a turning point for female heroes on screen. Plus, she loves waffles, which makes me relate to her character even more.

The Night Of (HBO)

Among the countless remakes and revivals that littered 2016’s big and small screens came HBO’s The Night Of. The eight-part series is led by a single premise that snowballs into a complex murder case sure to leave you in disbelief at each episode’s end. Both lead characters, played by Nightcrawler’s Riz Ahmed and the acclaimed John Turturro, carry a brilliantly paced story that deals with an array of social, cultural and political matters as conveyed through complicated characters and settings. The Night Of is finally that show; one able to conjure an I-can’t-wait-to-watch-the-next-episode sentiment that is reminiscent of Breaking Bad, or even its spin-off series Better Call Saul. It is shows like these that help cement television as a form that can and should be reckoned with.

For those unfamiliar with the infamous 2007 murder of British student Meredith Kercher, the setting is insular Italian town Perugia, and the suspect is her naïve yet enchantingly chipper housemate, American exchange student Amanda Knox. This documentary takes its viewers on a wild ride through the media coverage of the manhunt, the trial, and the many twists and turns of the convictions. Throughout, there are judgements made of the suspect: as evidence surfaced that Knox had been described as ‘promiscuous’, and had spent the night of the killing at her new boyfriend’s apartment, both the Italian and international media began painting ridiculous images of her as ‘Knox, the Sex Fiend’, ‘Knox, the Crazed Pervert’. All claims that were, firstly, completely blown out of proportion, but also completely irrelevant. Knox was then inaugurated into the global press as ‘Foxy Knoxy’; their crowning, though not final, attack. This documentary has definitely landed in my “makes me sad about the state of the world” pile, but is doubtless worth a watch – if only for the true crime twists and turns, and for the final vindication of our condemned heroine.

The fourth season of this much loved, critically acclaimed program did not disappoint. Its trademark combination of humour and heart was ever present throughout, and there were a few standout episodes that will no doubt stay with viewers for a long time. While the depiction of a relationship breakdown early in the season was clever and raw, the season’s two final episodes took the show to a whole new level of quality, with their portrayal of an unexpected tragedy and its aftermath. In these episodes, Please Like Me once again showed its ability to deal with mental illness and loss in a sensitive and honest way, and proved that Australian television can be just as brilliant and affecting as anything made elsewhere. More, please!