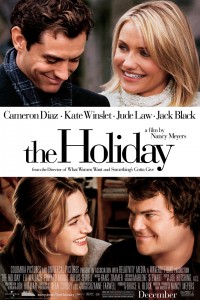 When it comes to Christmas rom-coms, only two are of any importance. These films are of course Love Actually and The Holiday. Both films give you a slight guilty feeling about watching a rom-com, which quickly dissipates as you become emotionally involved. But why should we feel guilty about our emotional entanglement with such films? After all, if ever there was a time for cheesiness it was Christmas time! So settle in for a trip back to the simpler time of the mid ’00s, when rom-coms were still a big deal and having twenty storylines in a single movie wasn’t a thing yet.

Rom-coms have a bad rep.  Sure, we need better rom-coms that don’t turn romance into a Disney happy ending, that aren’t unrealistic, overwhelmingly white, heterosexual, and boringly perfect.  But still I wonder if a major reason that rom-coms get blasted is because their primary audience is women. They are popular and so not taken seriously, like Kanye.  At the same time, that guilty feeling you get when watching them is a feeling that says you are betraying the sisterhood. But let us at Christmas time embrace good rom-coms and by so doing reinvigorate the good messages behind the whole genre (while critiquing the bad)!

In the case of Love Actually and especially The Holiday these films constantly reference romantic movie tropes. For example, Liam Neeson and his son watch Titanic to get romance tips in Love Actually, and Amanda in The Holiday has a movie trailer playing in her head reminding her of her own sloppy love life. These moments make these films self-aware of the fanciful issues they are discussing, and so they give a sly wink back to their female-based audience – there we go, rom-coms can be smart, people!

Let’s talk about Love Actually. I give it a cheese factor of 10, a romance factor of 6, a Christmas merriness factor of 10 and a weepy factor of 8. I watched this movie after being dumped and cried for the entire last half, as somehow the entire movie had become all about me and my life. That doesn’t say much really because I also cried that day about Joey breaking up with Elle McPherson on Friends (and she was the worst), and a month ago I cried about having no ravioli  (so keep this all in perspective when rating the weepy factor of the film).

Everyone knows Love Actually’s deal by now. A whole bunch of loosely connected individuals have their own Christmas romance adventures, Liam Neeson remains the best dad in history, Laura Linney is the best sister ever (but I still wish she had slept with her co-worker), and Hugh Grant is Prime Minister (there have been enough jokes made about the absurdity of this so I won’t make another).

It’s funny how a film can be at once disturbing and romantic. You know the song from Love Actually? Not the Mariah Carey one, the one Bill Nighy sings, Love is All Around? That song has this line in it that goes: “You know I love Christmas. I always will. My mind’s made up. The way that I feel. There’s no beginning. There’ll be no end. Cause on Christmas. You can depend.” I always thought the line was “you can pretend”, thus leading me to believe that the spirit of Christmas love in the film was about pretending to have a good time to appease your dutiful loved ones. Which explains the heartbreaking Emma Thompson and Alan Rickman affair plot, and the famous scene with Rick from Walking Dead with his signs that say he has secretly been perving on his best friends wife.  But the line is “depend” – how beautiful is that! Why there remains so much pretending in it though, I’m not so sure.

Moving on to The Holiday, for cheese factor I give it a 7, romance factor gets a 9, Christmas merriness gets a 10 and weepy factor gets a 6. In a nutshell, The Holiday may be the best rom-com of all time. You can argue with me about this but basically The Holiday does everything right. We begin with two unlucky in love types: Amanda (Cameron Diaz) from Los Angles and Iris (Kate Winslet) from Surrey in the UK. The two women connect online and swap houses over the holidays to escape their horrible ex-boyfriends. Amanda finds the hunky Graham (Jude Law) soon after arriving and Iris meets Miles (Jack Black) as she helps her elderly but sprightly neighbour, the retired film maker Arthur (Eli Wallach). As an aside, if Jack Black is never a romantic interest in a film again I will be sad because he is seriously adorable.

On the surface this plot all seems dull and predictable doesn’t it? I can hear you screaming, why do these two super successful women need to stumble upon a couple of men to find their Christmas happily-ever-afters? Ok I’ll tell you why: they don’t. Yes there is love and all the soppy gooey eyes that go with that in this film, but that is not how these women find their worth.  They find their worth through realising they deserve better, so why not go out and find it! This is a film about leaving the past behind and living in the moment, which is perfect as we leave the monstrosity that was 2016 behind. It might be about that or it may be about finding a good rebound – I maybe too emotionally connected to this film for reasons that are too deeply buried for me to discuss.

Perhaps the true message of The Holiday is to leave tradition behind and go it alone for Christmas. You’ll have more fun, you can dance to loud music, drink wine, and kiss someone new. Let us do as the rom-com does this Christmas:  dress up as Christmas lobsters with napkins on our heads and tell the whole world to bugger off. Watch the films – you’ll understand.