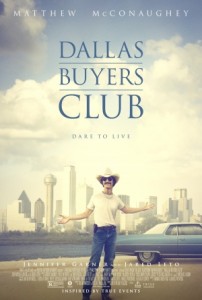 I’m so glad for Matthew McConaughey. It must’ve been so frustrating to do one vapid rom-com after another knowing he has greater, unused talent.

Although being paid obscene amounts of money probably soothed him somewhat.

In The Dallas Buyers Club, McConaughey again reveals his acting ability playing a rodeo cowboy in southern United States. The film is set during the 1980s, and Ron Woodrow’s life is thrown into turmoil when out of the blue he is diagnosed with HIV and given thirty days to live. He expresses disbelief and insists that he isn’t a homo, refusing to understand how it is possible that he could have contracted the virus. (It was at this moment that my mind flashed back to that incredible eighties public health announcement: the voice-over said AIDS was no longer a disease that affected just the gay population – everyone was at risk. A Grim Reaper demonstrated his lack of prejudice in a bowling alley, knocking over people from all walks of life).

Following his diagnosis, our hero leaves the hospital after declaring ‘Let me give y’all a little news flash. There ain’t nothin’ out there can kill fuckin’ Ron Woodroof in 30 days.’

It was this absolute refusal to die that keeps Ron Woodroof alive well beyond the thirty days he was given to live. Woodroof travels to Mexico and procures several treatments that are non-FDA approved and forms a ‘buyers club’: for a paltry $400 people can gain access to all the medications they need.

This film illustrates how the story of this virus is far from over and how it will continually evolve. In the 1980s it was a death sentence, but today doctors are saying it might be better to have HIV than cancer. Yet a mere thirty years ago a generation of homosexuals were brutally effected by this epidemic and took drastic, desperate measures to stay alive.

An almost unrecognisable Jared Leto playing an HIV-positive transgender woman demonstrates how unjust the attitudes towards the afflicted were, and how drastic action can seem completely reasonable. In fact, Ron Woodruff begins the film as a homophobic layabout who, according to his brother, is wasting his life. By the end of the film he has completely transformed; his closest friend belongs to a category he did not know existed at the beginning of the film and his whole life is driven with a sense of purpose – elongating his life and those of the Dallas Buyers Club.

Despite being handed a death sentence, or maybe because of it, Woodroof transforms into a very canny businessman who can  hold his own in arguments against medical professionals about treatments. The research that he undertakes himself on medical treatments and the law relating to the selling of these concoctions is both sound and convincing.

Nowadays, living with HIV carries very different connotations and problems. If one contracts the virus while living in the Western world and can access the treatments, it does not affect longevity of life. HIV developing into ‘full blown’ AIDS is no longer a certainty. However, the illness does not look to be fading into history any time soon (in 2009 Pope Benedict XVI made a trip to Africa and stated that condoms were not the answer to the continent’s fight against HIV and AIDS and could make the problem worse). And it is becoming clear that because there is so much profit to be made from treating it, a cure will not be found any time soon. There is too much money to be made from treating HIV and AIDS, rather than curing it.

This film tells a deeply personal story that represents just one of the myriad of experiences had by the victims of HIV and AIDS. It also put a harsh spotlight on how highly politicised the attitudes and treatment were (and in many ways still are), and considers how we want the story of the illness to end.