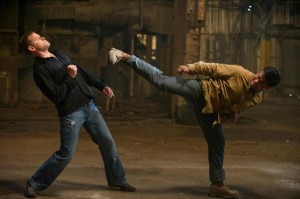 Everybody was kung fu fighting. Or at least that’s what it feels like in Dragon Eyes. The action film sees two feuding gangs disarmed by a mysterious stranger who hides his chequered past. But behind those eponymous eyes is a warrior king and one who is also the living embodiment of the great masters.

Cung Le stars as the defiant Mr. Hong and in real life he is also a champion mixed martial arts fighter. This possibly accounts for his stellar fighting ability on screen but also his rather dull and lifeless acting. The story is a non-linear one where multiple flashbacks eventually reveal that Hong was sent to prison for a crime he didn’t commit. After getting into a scuffle with some toughs in the yard, Jean-Claude Van Damme (in cameo mode) takes the youngster under his wing and teaches him to be prizefighter.

The indebted Mr Hong leaves prison and decides to repay the offering to his master by returning to the latter’s hometown in St. Jude. This is a city under siege by multiple gangs and a corrupt, hear-no evil; speak no evil police force (one lead by Peter Weller who looks like he’s come straight out of Public Enemies). Hong cautiously earns the gang leaders’ trust but eventually uses them to his advantage; playing the two main groups off one another and making them all look like a pack of fools.

The energy is kept high and adrenaline-filled. With little screen-time devoted to the underlying story, most of the visuals tend to be drawn-out, dramatic stares or one of a multitude of fight scenes. The latter includes a combination of street fighting, marital arts, bashings and gun-toting. The overall tone is a gritty one with the colours favouring grey and brown hues. This means it all looks rather dreary save for the animated, almost comic book-like titles that are used to introduce each of the main players.

This dark story is ultimately rather muddled by all the different flashbacks and forwards through time and even when you piece them all together this reveals something that is rather generic. For some people the obvious plot holes – like huge prison cells for training and being allowed a gun in a cell – will make this whole affair seem less dragon eyes and more the rolling of eyes.

But if all you’re looking for is a vengeance-filled, no-brainer full of shocking and violent cops and robbers games then this showdown is full of enough bone-crushing, bullets, blood and bruises for you. Dragon Eyes is ultimately filled with lots of action but little substance, meaning it should give martial arts fans their kicks even though the rest of it fails to hit the mark.