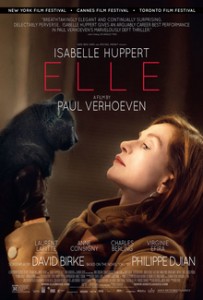 Pained gargles ring out over a black screen and before colours fade in, the image of a brutal attack already conjured. So begins Elle, Paul Verhoeven’s multilayered and genre-defying latest offering. Dark rape revenge thriller, black comedy, or cutting social commentary?  Well, that all depends on who you ask, and in some ways all are true. Elle questions everything we know about victimhood and power dynamics in a “Fifty Shades” culture, and if you feel a little squeamish at times, maybe that’s not such a bad thing.

Michèle Leblanc, superbly played by Isabelle Huppert, is certainly not the kind of woman likely to draw sympathy from many viewers. The middle-aged head of a video game company that designs violent content, she is cold, caustic and calculating. ‘The orgasmic convulsions are way too timid,’ she scolds a room full of young male employees early in the film, as a damsel is penetrated by a clawed tentacle on screen behind her. In another scene, she demands one of her staff show her his penis in order to keep his job. Through her interactions with men (her employees, her ex-husband, her lovers, her son), Leblanc exudes typical ‘masculinity,’ and refuses to play the role of victim, even when we expect it most.

While at the forefront our unlikely heroine continues to be pursued and taunted by her attacker, the film is about much more than sexual assault. Sub plots branch out like a spider web: a milquetoast son bullied by his pregnant girlfriend, a mother who wants to marry her gigolo, a father who is France’s most notorious mass murderer, a guilt ridden affair, an ex husband with a new yoga instructor girlfriend, and a strapping young neighbour eager to lend a helping hand. It is this deft complexity that allows Huppert the space and nuance to develop a character that can defy expectations, because the film itself never sets any. With Leblanc nominated for the Best Actress Academy Award, any reservations should be put aside even if only to observe her performance.

On his selection of Huppert for the role, Verhoeven commented: ‘no American actress would take on such an amoral movie’.  It is this void of moral overtone that makes Huppert’s characterisation so compelling. After she is raped in the opening sequence, Leblanc sweeps up the debris, has dinner with her son then takes a bath, swishing away blood soaked foam with a flick of the wrist. From here we get to know a woman that is both damaged and strong, both ruthless and caring, both likeable and deplorable. There is menstruation, female masturbation, underwear sniffing, tears, laughter, pain and pleasure. Refreshingly, femininity is not swept up with the smashed crockery; the women in the film are just as prominent and flawed as the men.

After the two hours and ten minutes are over, it will be up to you to decide what you think the film was setting out to do and what it has achieved, but don’t be surprised if it is an entirely different response to the person sitting next to you. While principally Elle is the story about one woman, in its literal translation to English it is a story about she. The story of woman in a society increasingly blurring the lines between violence and pleasure, fantasy and reality. The story of what happens when she decides to take hold of the restraints and how viewers might feel as a result.

Samantha Armatys is a Creative Writing research student at Griffith University on the Gold Coast. When she isn’t delving through dense philosophical references she enjoys writing about all things pop culture and feminism.