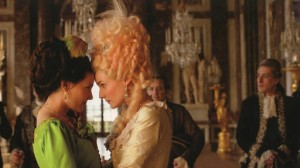 Farewell, My Queen (or Les adieux à la reine) is a film about three important women from French history. They are a Queen, her lover, and the Queen’s reader who is hopelessly devoted to the monarch. The latest film from director, Benoît Jacquot is a sumptuous and intimate costume drama with lots of upheaval, making it not unlike A Royal Affair.

It is 14 July 1789 and the Bastille has been stormed. But at the royal palace in Versailles only some of the news and gossip is beginning to filter through. The royal house is in a state of uncertainty where its inhabitants are unsure what to do: i.e. to stay put or to flee. But the flipside to this story is that there is more to this gilded household than meets the eye- there are a series of bizarre love triangles and entangled emotions also at play.

The film is not a strict chronicle of the end of Louis XVI’s (Xavier Beauvois) reign. Nor is it an in-depth portrait of his wife the Queen, Marie Antoinette (Diane Kruger). The history books have been ignored in part as the tale is based on just four days of the royal family’s life as told in the novel of the same name by Chantal Thomas. Here, things are told from the perspective of the Queen’s reader, Sidonie Laborde (Léa Seydoux who shines in the role of lead actress and principal storyteller).

Laborde is an intelligent girl but her head is ruled by her heart. She has a high amount of respect and affection for the Queen but this is not replicated. The Queen is far too obsessed with jewellery and is flighty and frivolous. Plus, her favourite is the Duchess Gabrielle de Polignac (Virginie Ledoyen). And while these two were married to men at the time, the film insinuates that they were fluid in their sexuality and possibly lovers.

Viewers of the film will benefit from having an understanding of French history because Farewell, My Queen does not provide a lot of background information. Its attention is instead drawn towards a series of intimate close-ups of the characters and a great amount of attention has been paid to creating the visual elements instead (e.g. costuming, props, the set, etc). There is a large disconnect between the opulence of the palace and the life of the poor, common people.

The film does not delve deeply into the social unrest typical of this time. It’s more about the characters reacting to their impending doom and making choices (some of these more significant than others). It’s very dramatic, subtle and sensual. There are the intertwining stories of unbridled passion and debauchery and it shows how this can contribute to a monarch’s downfall as much as mismanagement and apathy towards their subjects.

Farewell, My Queen is often a rather slow-burning story. The main themes of power, loyalty, betrayal and sadness are told from the subservient minor character’s perspective in the most subtle of ways. In short, it’s a fly-on-the-wall account of the excesses of palace life and well, we all know how that ended.