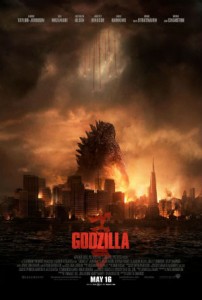 Does a speechless female monster count as a primary female role? Probably Not.

As most of us know, pop culture plays an important role in the shaping of societal norms. The images we see in films, television shows, and magazines, influence the way we think and how we perceive the world. This is why it’s troublesome to see heavily-marketed summer films, like Godzilla, completely lack any nuanced depictions of women. While, granted, the true star of the film is a radioactive gorilla-whale, by completely ignoring its female stars, Godzilla makes the plausibility of an irritated 30-stories-tall reptile seem more real than the existence of a fleshed-out female character. To reshape norms surrounding gender and agency, raise the aspirations of young girls, and give our female film characters the substantial, well-developed roles they deserve, we need to take a look at the bigger picture.

Since its inception, the monster movie genre has not been the best place to look for accurate representations of women. Men are traditionally seen as the ones with power, with women characters devoting their energy to either worrying about men or attempting to manipulate them. “Strong” or “feisty” female characters aren’t the same thing as “well-written” or “complex.” In the original 1954 Japanese version of Gojira, the female lead, Emiko, has a lot of potential. But, like the others, she has a hard time standing alone. The daughter of a palaeontologist, she visits the island where Godzilla first appears to the Japanese people. When she discovers that her betrothed, Dr. Serizawa, has invented a mechanism that can defeat him, she divulges this secret to her lover, Hideo Ogata, who pressures her to force Dr. Serizawa to use it against the monster. Without her quiet heroism Godzilla would not have been killed, but the focus always remains upon the tension between Serizawa and Ogata.

In the updated version of Godzilla, now in cinemas, not much has changed in terms of the visibility of female characters. The film suffers for it, considering that audiences missed out on more screen time from the likes of Oscar-winner Juliette Binoche, and critically acclaimed actresses Elizabeth Olsen and Sally Hawkins (who was recently nominated for an Oscar for her role in Blue Jasmine). Olsen receives the most screen time of them all, though her role as wife/nurse doesn’t reach far beyond wringing her hands over the disappearance of her husband and the imminent destruction of San Francisco. That said, with the exception of Aaron Taylor-Johnson in the lead role, none of the actors have much to do. But the three female actresses, Binoche, Olsen, and Hawkins, do little more than react to the male characters around them. In the 60-odd years since the debut of Godzilla, the tall rubber-suited terror, the meaty parts are still all given to men.

While it’s tricky to dissect a plot that relies more upon CGI special effects and giant monsters than character development or acting performances, Godzilla is far from being the only summer blockbuster film to put baby in the corner. With the ratio of male to female characters in films currently standing at 3:1, it’s clear that there is room for improvement. A study was recently conducted revealing that films passing the Bechdel Test have a better return on investment than films that fail. But does this mean anything? With 37 out of 39 of this summer’s films being directed by men, is there going to be room for any “real” women to reach out to audiences? It’s doubtful.

Is it the job of movies to offer a well-balanced distribution-by-gender of roles? No, but like Oscar Wilde said, ‘life imitates art far more than art imitates life.’ Making the lead scientist in Godzilla a woman might not create more female lab technicians, but it would normalise the idea of a female scientist in a pop culture context. We still need female characters who can be strong or weak or both or neither, and who serve as more than one-dimensional props.

Godzilla, in all his city-stomping glory, brings people of the world together in a united front against his atomically-bad breath and blind fits of rage. Tanks are deployed and tiny soldiers leap from helicopters into frothy white-capped waves. But the fight for female equality, in all forms of art and culture, will not be won this way. Instead of picking up arms to fight, we must pick up pencils and books, and make the story of women one all kids understand. We need more, and better, conversations about women in film, and a better dialogue about the need for women directors, screenwriters, and decision makers in Hollywood before we can declare this battle a victory.