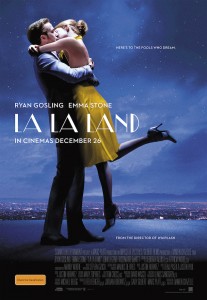 Discouraged by another failed audition, La La Land’s Mia (Emma Stone) takes the high, albeit hopeful, road to produce a one-woman show and forge her own luck in life. At one point, daunted by the feat, she worries to her lover Sebastian (Ryan Gosling): ‘It feels too nostalgic to me. Are people going to like it?’ And with no hesitation he responds, ‘fuck ‘em’.

In theory, a classic Hollywood musical in 2016 is a setup for failure. But like Mia, La La Land director Damien Chazelle couldn’t care less, rather choosing to pay tribute to the dreamers in his latest feature. It has paid off, with the film collecting countless award nominations and acclaim, and wowing critics for its novelty and charm as an expertly crafted jazz musical that hearkens back to the golden age of cinema.

It seemed only fitting that this film be set in present-day Los Angeles, where Mia works as a barista at the Warner Bros lot serving stars between auditions, and Sebastian barely survives as a recently unemployed jazz musician. As fate (and convention) would have it, they cross paths and together realise their deepest passions, heartaches and fears the only way a musical knows how: through spontaneous song and dance.

Characters burst from all corners delivering grandiose numbers, draped in vibrant reds, blues, and yellows. Other times conversation seeps seamlessly to song, switching pace for a more sombre tone that is equally captivating in its touching intimacy. It’s where the love affair is most visceral, where it erupts and where it sometimes fails – and it’s only amplified by Gosling and Stone’s visible on-screen chemistry.

Regardless of when, why or how, the music is strong – both lyrically and melodically – and it is varied, so its appearances are welcomed and never exceed their purpose. These moments forge parallels to Chazelle’s 2014 smash Whiplash, particularly when trumpets and drums suddenly roar and blare and invade a scene in all their raucous glory. Though only the director’s third feature, his filmography seems to chronicle a love affair he holds dear with jazz; one that only frequent collaborator Justin Hurwitz (who composed orchestral and lyrical work for each of Chazelle’s works) seems amply fit to convey.

But the music is only half of La La Land’s charm, the other being its glorious visuals. Los Angeles acts as a blank canvas ripe with possibility for cinematographer Linus Sandgren (Joy, American Hustle) to experiment with mood through clever lighting and colour. Scenes feels crafted for that exact moment – whether in times of drama or comedy, or when traversing the lines between fantasy and reality where Sebastian’s and Mia’s dreams are beautifully realised. Mia’s dress – canary yellow – beams against a pastel-pink sunset that’s fading against the night sky. Rich shadows frame a spotlight on a solitary Sebastian, who bangs at his piano keys in a turbulent moment of passion, erasing time and space wherein he and Mia endure as the only two souls in existence.

But among the flashy visuals and bombastic musical numbers is the film’s thematic substance – and that makes it special. The same nostalgia Chazelle attempts to reignite in format is conveyed through Mia’s and Sebastian’s separate pursuits: she dreams of making it big as an actress (that age-old fantasy for Hollywood stardom), and he dreams of opening a classic jazz lounge reminiscent of musical noir Blues in the Night. But soon enough, their affair begins to suffer at the helms of their success.

It’s Mia who really struggles with the concept of love most. On one hand, she rejects the genre’s Cinderella myth and avoids becoming a heroine who impulsively lusts for and depends on another to complete her. She’d rather dream big despite a lack of recognition, and risk it all for a chance at happiness – even if that means great sacrifice. But that’s not to disregard Sebastian entirely, who provides her with some much-needed motivation at times.

These personal battles with the reality of compromise echo way beyond each character’s narrative struggles. The otherwise tired themes of the genre – of falling in and out of love and following your dreams – could easily have made La La Land another stale variation of most romantic tales. But it’s not. The film tackles familiar territory,  where ambition collides with fear when searching for professional and personal fulfilment, and challenges them entirely. In both Mia’s and Sebastian’s complex characterisations, and in Chazelle’s self-reflexive take on the genre, La La Land is as much entertainment as it is a poignant and nuanced exploration of humanity.

So the film’s cheery veneer quickly chips away, and the callousness of an industry that worships everything but values nothing reveals itself. Mia and Sebastian’s tumultuous love affair may leave their flaws and failures exposed, but they emerge as the film’s most authentic element amongst the great fakery that surrounds them. The magic and the whimsy that once saturated Hollywood has apparently been sorely missed. La La Land knows that fake is here to stay, but so are our collective journeys for happiness. So it chooses to celebrate it through witty, downright funny, and entertaining cinema that’s equally heart-warming as it is totally disheartening.

La La Land reminds me why I love cinema: for its wondrous experiences that transport me to another world, regardless of how extravagant or unreal. It’s here to reassure us viewers that maybe it is okay to be a dreamer, despite what anybody says.