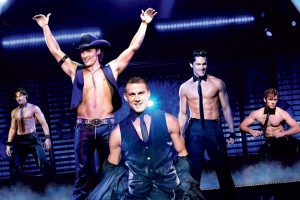 What may not seem like the most obvious addition to Steven Soderbergh’s body of work (director of the Oceans series, Traffic, Contagion), Magic Mike represents his first venture into the comedy realm – and frankly, he handles it quite well.

After moving in with his sister Brooke (Cody Horn) and quitting his job as a tiler on day one, 19 year old Adam (Alex Pettyfer) meets Mike (Channing Tatum) who introduces him to his fast-paced world – based in a strip club. When one of the performers suddenly falls sick, Adam is thrown onstage in front of a crowd full of screaming women. But he ends up relishing the attention (and the money) that it brings. It’s not long before the head of the club, Dallas (Matthew McConaughey) allows Adam to become a permanent part of the show. Dressed in nothing but skin-tight leather pants and a cowboy hat for the majority of the film, McConaughey’s Southern charisma is hard to beat. A particularly memorable scene occurs when Dallas is teaching newcomer Adam some sexy dance moves.

With a mere $7 million budget (comparatively low to most Hollywood films), Magic Mike was co-produced by Channing Tatum, and is based partly on his own experiences as a stripper in Tampa, Florida during his late teens (Tatum later went on to star in a Ricky Martin video, before taking up modelling and finally moving into in the acting world with his break-through role in 2006 with Step Up). His dancing skills are certainly notable.

On the downside, there are some problems with the plot – the film seems to be confused about who the protagonist is – we start to follow Adam’s downfall as he experiments with drugs and wrangles up a huge debt, but we don’t really return to his story at the end. We do however, meet Mike at the beginning of the film and follow him as he makes some tough decisions about where he wants his own life to head.

Despite these inconsistencies, Magic Mike is ultimately a whole lotta fun. It would be interesting to hear what the male viewers think – so please post comments below!

Magic Mike is in Australian cinemas from July 26th.