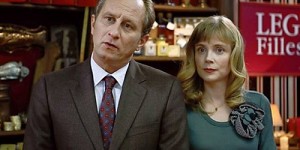 There are many things in life that scare us, and for some people that list extends to just about everything. Romantics Anonymous tells the story of Angélique (Isabelle Carré) and Jean-René (Benoît Poelvoorde), two such people who are terrified of daily life, and especially the prospect of falling in love. Angelique is a member of ‘Émotifs Anonymes’ (a support group for emotional people) and Jean-René sees his therapist regularly but is still too scared to answer the phone or make physical contact with other people.

Their paths cross when Angélique mistakenly applies for a job as the sales rep at Jean-René’s ailing chocolate making company (she is successful, despite her deep fear of interacting with other people). As they each try to conquer their demons, they begin to fall in love, but it seems unlikely that these two people could ever make it work. Meanwhile, the chocolate company is about to go bankrupt and Angélique can save it, if only she has the courage to admit it.

At only 80 minutes, this film is short and sweet. With its bizarre and far-fetched storylines, making it any longer might have ruined its refreshingly unique take on love. Both leads are endearing and funny, and they each make fun of their character in a way that says ‘hey, it’s okay to be afraid of life sometimes’. This is definitely not a serious film, and if it were it would not be half as enjoyable. It is clearly meant to be odd, and the audience must embrace this strangeness from the very beginning.

Romantics Anonymous very much lives up to stereotypes of France, with its love of chocolate, cobblestoned streets and quirky characters (some wearing berets, of course). French films are often cute and different, and this certainly qualifies for such categories. Any review of this film should include a warning because like many movies set in France, it is somewhat likely to make you want to throw away your life and move to Europe immediately, so that you too can become a chocolate maker and dance in the streets singing sweet French songs.

Although it centres on Angélique and Jean-René, the supporting roles of Angélique’s therapy group and the staff at the chocolate shop add that extra touch of humour and silliness to the story. At times the storyline jumps around just a bit too much but by the end of the film this becomes something to appreciate, and if the plot had developed like a regular story then it probably would not have quite worked. If you’re looking for a brief and delightful interlude from intense and serious films then Romantics Anonymous is a perfect choice.