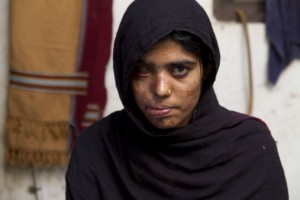 In one second a life was ruined. So goes one of the many harrowing statements made in the documentary film, Saving Face. Directors Daniel Junge and Sharmeen Obaid-Chinoy have detailed a sensitive issue, exposing the plights of victims of acid attacks in Pakistan, with this Oscar award-winning short proving to be worth a feature-length runtime.

Conservative figures estimate that between 100 and 125 attacks occur each year in Pakistan and that the youngest victims are between 12 and 14 years old. There are no official statistics available and many cases go unreported because previous perpetrators have often been acquitted and largely unpunished. The reasons such horrid cruelty occurs can range from the rejection of marriage proposals and sexual advances, to women seeking divorce or causing “shame” to their husbands.

The film follows the plight of two such victims in detail. The first is Zakia, a 39-year old woman whose assault was at the hands of her alcohol and substance-abusing husband after she filed for a divorce. Now forced to live with her brother, she is virtually housebound, save for the few occasions she ventures out in a full burqa and sunglasses to mask her embarrassment over her permanent, physical disfigurement.

The other subject is the 23-year-old Rukhsana, a woman who has also suffered immensely. For reasons not described in the film, her husband threw acid on her while her sister-in-law threw petrol and her mother-in-law set her alight and locked her in a room to burn to death. She survived and intermittently escaped, but was eventually forced to reconcile with her husband and his family due to financial woes and to win favour with them so she could see her sick child. The family responded by building a wall between her room and her daughter’s so she couldn’t even see her.

Saving Face follows the lives of these two brave, courageous and determined women as they attempt to bring their husbands to justice while telling their story with dignity as the physical, mental, judicial and social repercussions of this monstrous, premeditated violence continue to reverberate. A moral victory is won when the conservative, female politician, Marvi Memon introduces a bill to parliament that will impose heavy fines and life sentences in prison for this kind of violence. The law is passed unanimously.

Another touching layer to this story comes courtesy of Dr. Mohammad Jawad, a Karachi-born plastic surgeon who now lives in London with his three beautiful children, lovely wife and good car. Dr. Jawad rose to prominence after he performed some groundbreaking surgery on the English model, Katie Piper, after she was attacked with acid in 2008 by a crazed stalker.

These days the surgeon returns to his homeland periodically with the assistance of UK Charity, Islamic Help to provide reconstructive surgery to these impoverished victims. It’s not a complete restoration but the operations are designed to alleviate pain and restore functionality and facial features. In most cases it also helps instill a newfound confidence in these sufferers.

Saving Face is a confronting film that highlights oppressed women in a section of Pakistan’s society that appear to condone and normalise violence. Although it’s disturbing to watch at times, this documentary is ultimately one that is filled with hope as progress is made for the emancipation of these marginalised women who were once serving their own life sentences as a kind of living dead. In short, a heart wrenching drama and an emotional must-see.