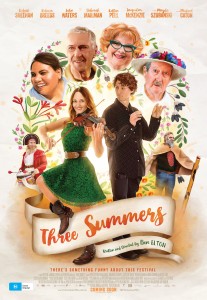 When a film begins with Magda Szubanski playing an eccentric radio host, you can’t help but feel you’re in for a good time. Writer and director Ben Elton (The Young Ones, Blackadder) has delivered just that with his new Australian comedy Three Summers.

The film is set entirely at a fictional folk festival in Western Australia called ‘Westival’. When it opens, we meet Madga Szubanski’s ‘Queenie’, resident radio commentator and interviewer, along with a colourful collection of characters whose development we will follow over the course of three summers and three festivals.

At the centre of the story are talented violinist Keevey (Rebecca Breeds), her father and bandmate Eamon (John Waters), and the opinionated Roland (Robert Sheehan). Keevey and Eamon are old hands at Westival, playing every year with their Irish rock band The WArrikins but never resolving the issues that have held them both back since the death of Keevey’s mother.

Roland, on the other hand, is trying to push folk music’s boundaries with his experiments on the Theremin (an electronic instrument that was definitely not featured on Good Vibrations by The Beach Boys, despite common assumptions that have Roland despairing). Keevey and Roland click and clash all at once, each thinking they have something to teach the other but soon finding this won’t be easy.

While this story of romance and reaching one’s musical potential drives the film, there is plenty more going on when it uses a wider lens. As anyone who has been to an overnight music festival before can attest, the goings on throughout the campsite are often just as interesting as what’s happening on stage.

In Three Summers, the folk festival acts as a microcosm of contemporary Australia. Within this setting, Elton explores two of the country’s most fraught issues: immigration and Australia’s relationship with its Indigenous peoples. One of the festival acts is an Indigenous dance troupe led by Jack (Kelton Pell), who wants music and performance to offer something positive to the boys in his group. When the group performs, he reminds the audience that they are performing on land never ceded by its First Peoples.

But grandfather and English folk dancer Henry (Michael Caton) isn’t interested in their performance or what Jack has to say. He’s also wary of Jafaar (Amay Jain), a young Afghan refugee fostered by an Australian couple camping nearby. Henry’s granddaughter Ruby (Nichola Balestri) is mortified by his ignorance, but it soon becomes clear that his fear stems from old childhood wounds that might just be beginning to heal.

It’s a refreshing change to view these two issues on a human level. Three Summers tells a story of how people can learn through music and performance, and reminds us that when you see someone you think is different from you up close, you might realise you’ve got something in common. The most sombre note in the film is struck when asylum seekers who have played a set at the festival have to return to detention – there are some problems that even music festivals can’t fix.

This film is a showcase of remarkable Australian talent, from its cast to the locally grown soundtrack, which perfectly captures the sound of Australian summer festivals by featuring music by the likes of Sarah Blasko, John Butler Trio and Gotye. The characters also deliver some great music, especially the WArrikins (who show Roland just how good pub rock can be). Rebecca Breeds is captivating in her leading role as Keevey, and she is backed up by established actors who never disappoint, including Waters, Caton, Pell and the wonderful Deborah Mailman.

The moments of resolution in this film are perhaps a little cheesy at times, but this can be forgiven if you appreciate what they are trying to say. It’s nice to see an Australian film that makes you feel good and isn’t afraid to engage with the nation’s problems head on. Ultimately, Three Summers is at once a love story and a celebration of Australia, and perhaps a hopeful example of what the country could be.

Three Summers is in cinemas 2 November 2017.

Rosie Hunt is Lip’s film editor. She tweets at @roseh11.