film review: to rome with love 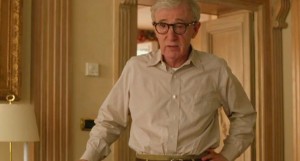 To Rome With Love is a collection of stories set in the beautiful Italian capital, with a brilliant cast and a good dose of Woody Allen humour and storytelling to its name. These stories have no noticeable connections other than their setting, but the city of Rome is captured in such a way that ensures it is the only common thread needed.

Each character is interesting in their own right, but Juno’s Ellen Page as Monica, a pretentious young actress making moves on her best friend’s boyfriend, is definitely a highlight. Her fickle and self-obsessed ways are observed by John (Alec Baldwin), who is reminiscing about his misspent youth in Rome and telling Jack (Jesse Eisenberg) not to fall for Monica’s trickery.

More subtle stories like these are accompanied by the hilarious tale of Leopoldo Pisacane (Roberto Benigni), who suddenly goes from being a nobody working in an office to a very prominent somebody. This storyline is a clever comment on fame in our society – but it is also just very silly. Speaking of fame: the film also stars Penelope Cruz, Judy Davis and some increasingly recognisable faces like Greta Gerwig and The Newsroom‘s Alison Pill.

Woody Allen himself stars as Jerry, an opera director who is frustrated in retirement. He finally discovers what he has been looking for when he comes to Rome to meet his daughter’s fiance, whose father just happens to have a voice to die for – in the shower, that is. This story too is a tad ridiculous, but clever at the same time. It all works.

The city to which the film is dedicated is just as important to the experience as the characters and stories that are living within it. The shots of Rome’s burnt orange colours, timeless architecture and wide cobblestone piazzas will make you long to inhabit this movie.

It is bizarre at times, which takes a bit of adjusting, as the film seems rather conventional to begin with. Allen plays with reality in a clever way that manages to be both comical and insightful at the same time, especially with John’s trip down memory lane in Rome and Leopoldo’s brief brush with fame.

Every storyline seems to be a comment on a particular aspect of society and human nature, but they are also simply funny and enjoyable to follow. The film explores love, family, sex, fame and unfulfilled dreams coming true. It is quirky, sweet, undeniably funny and definitely a treat to watch.

One thought on “film review: to rome with love”