i am a girl: gendered experience around the world 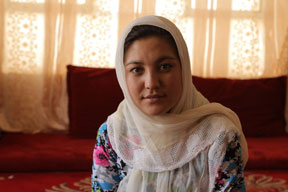 ‘I was taken to hospital to prove my virginity, and then to a hotel.’

Cambodian teenager Kimsey sold her virginity at 12 because her family needed money to eat.

She lives in slum-like conditions with an abusive boyfriend and a mother who takes care of her daughter while she works. Kimsey is acquainted only with hardship, suffering and loss.

Meanwhile, Breani lives in ‘the ghetto’, in the US, and wants to be ‘the princess of pop rap’. She exists in a world where her image is constantly reflected back to her: via Instagram, Facebook, her iPhone. She has the biggest lips you’ve ever seen.

International Women’s Day was last week. This celebration of the female experience is essentially about recognising the plight of women around the world. Documentary I Am A Girl , from director Rebecca Barry, takes a snapshot of the daily experience of six teenage girls around the world.

In it, we see Cameroonian Habiba preparing to get married to a man 15 years her senior. After leaving school she is upset at the prospect of leaving her family, but delighted to begin a life dedicated to her husband.

Kate is a Dr Who enthusiast who lives in Sydney, who speaks tearily about her depression and attempted suicide. We witness Kate graduate high school; it is obvious that education is a strong theme in this film.

The UN claims that investing in education for women is the best way to end poverty, and it has been proven that female schooling has a ‘ripple effect’ as children and family see the benefits.

At the moment it’s clear that girls’ participation in schools decline as they get older. They leave for marriage and to learn how to run a home; parents decide to invest instead in the education of their brothers, who will eventually earn the family money. 31 million girls are still out of school today.

Higher rates of female education is linked to better healthcare, an increased ability to negotiate for resources, and family planning.

In a seaside hut in PNG, Manu swivels her bulbous belly around as she packs her bag. She tells us with a smile that she learned about safe sex in primary school, but she never knew how to use a condom.

PNG has one of the highest child mortality rates, and when we see Manu in the hospital, the Port Moresby maternity ward is quite confronting. There are concrete floors. There are cheap plastic chairs. And there are many more women than the hospital’s capacity.

And of course, in Afghanistan girls are intimidated out of school by extremists. Brave and powerful Aziza is desperate for higher education.

Her mother says, ‘Her goals and dreams are important,’ and Aziza details matter-of-factly that she’d like to be a lawyer or government minister.

‘The Afghan government believes that women are incapable of doing this work,’ she says, ‘But Afghanistan has many brave, capable women.’ And she is one of them.

In the end, the film celebrates each individual, their unique beauty, and their potential.

Breani wants to inspire people to make their own change, while Kimsey says, ‘I’m trying to save money to make my dreams come true.’

Habiba says to the camera, ‘My dream is to stay with my husband unto death do us part, and that the Lord gives us children who can have an education.’

Children. Marriage. Eradication of poverty. And education. This is what women around the world are fighting for today.

To find out more about the film, go to http://www.iamagirl.com.au/