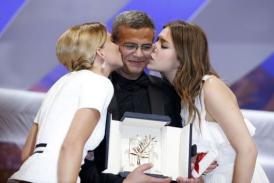 A lesbian coming-of-age tale has been awarded the Palme d’Or at the Cannes Film Festival.  La Vie d’Adèle (Blue is the Warmest Colour in English speaking countries) from French-Tunisian director Abdellatif Kechiche took the top prize in an awards ceremony on Sunday after creating widespread buzz for its graphic sex scenes.

La Vie d’Adèle tells the story of 15-year-old Adele (played by Adele Exarchopoulos) who falls in love with Emma, a much older woman (Lea Seydoux). Festival jury president Steven Spielberg told the Associated Press: ‘The film is a great love story that made us all feel privileged to be invited to see this story of deep love and deep heartbreak.’

While the movie’s stars deny the film has an inherently political message, it has been heralded by some as a landmark film for its intimate portrayal of a same-sex relationship. ‘This film is universal, as it’s a love story, so it’s not important if it’s two women,’ said the 19-year-old Exarchopoulos. ‘If it can show everyone tolerance, then that’s gratifying.’

Spielberg praised the film’s focus: ‘Gay marriage is something that many brave states in America are resolving,’ he said. ‘This film actually carries a very strong message, a very positive message.’

The film was released in the wake of protests against same-sex marriage in France. Same-sex marriage has been legalised in many countries across the world this year, bringing the total of nations that allow the union up the 15.  La Vie d’Adèle co-star Seydoux named the film ‘a witness to our time’.

The film runs for three hours and its portrayal of female sexuality has made headlines since its showing at the festival. Kaya Burgess of the London Times called it ‘one of the most beautifully and unobtrusively observed love stories I’ve seen on film.’ Director Kechiche told reporters that the depictions of sex were aimed at capturing beauty rather than making a statement on gay rights.

‘We hope that in the scenes the idea of beauty will emerge. I think sensuality is more difficult to film and capture onscreen,’ he said.

The audience reportedly gave Kechiche and the film’s stars a standing ovation as the prize was announced.

One thought on “in brief: lesbian love story takes out cannes palme d’or”