in brief: wonder woman to grace the silver screen again 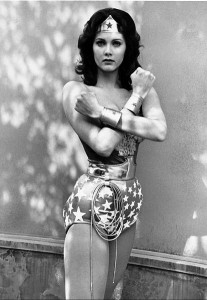 The world’s most recognisable female superhero, Wonder Woman, is set to make a comeback and join Batman and Superman in a feature film.

Batman vs Superman will be produced from the script of Man of Steel screenwriter, David S. Goyer and will see the two superheroes go head to head for the first time.

The fact that the Amazonian princess’s moniker is not featured in the title of the film has some feeling that the good news is tainted, seeing her relegated to what could be perceived as a supporting role.

Over the last decade there have been struggles to get the Wonder Woman franchise on the silver screen.

A number of projects have been proposed but as yet there has been no live action feature film in which Wonder Woman has been the protagonist.

Fans on social media have had mixed reactions about the announcement that former Israeli pageant queen, Gal Gadot will don the Lycra for the film, due to be released in 2015.

While there has been praise for choosing a woman from the Middle East, the casting of the slim Gadot has attracted criticism as depictions of Wonder Woman – like most female characters in DC Comics – show an unrealistically porportioned hourglass figure. This is in part due to fan’s idealisation of popular 1970s Wonder Woman television actress, the curvy Lynda Carter.