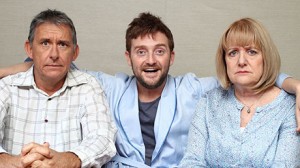 This week, the ABC has devoted lots of airtime to bringing mental illness into the spotlight. Titled ‘Mental As’, the suite of programming coincides with Mental Health Week and is all about removing the stigma from illnesses that are not always physically apparent, yet can be truly debilitating.

On Wednesday night, viewers were treated to Timothy, a once-off half hour comedy. While other programming for ‘Mental As’ has taken a documentary or panel discussion form, this was a lighter approach starring some much-loved Australian actors.

Comedian Stephen Curry is Timothy, a young man whose rise to the top in the tech world of Hong Kong has ended in a mental breakdown and bankruptcy. Timothy is now back living with his parents in Wollongong, far cry from the high-powered, high stress environment in which he built his career. The program opens with a therapy session involving Timothy, his therapist Dr. Nelson (Lisbeth Kennelly), mother Melinda (Denise Scott) and father Colin (Peter Rowsthorn). Timothy recalls the scene of his breakdown, and from this point on the show is frank, funny and ultimately touching.

Timothy follows its title character through a series of relapses on the way to recovery. His parents do their best— especially his mother, who buys live silver carp on the black market and kills a fish with a mallet for each of Timothy’s meals (it’s what he ate in Hong Kong, and his therapist suggests it would be unwise to take away this comfort). Dealing with Timothy’s unpredictable moods, carp-only diet and newfound love for martial arts practiced on the washing line is a challenge, but ultimately it is clear Melinda will continue to hit those fish on the head, and Colin will patiently support them both. His parents might be somewhat out of their depth, but they won’t be giving up on their son.

Each of the actors shines in this program, despite only having half an hour to work with. Kennelly as the condescending, passive aggressive therapist is very clever, and Denise Scott is brilliant as she begrudgingly heads off to kill yet another carp. Stephen Curry is unsurprisingly the star: as Timothy he is convincing and endearing, and although he plays a comedic role he does not mock his character, bringing him to life with care.

The show’s clever comedy raises some important issues related to mental illness. As we see Timothy’s parents confused by what is best for him and frustrated with the demands of his therapist, we are reminded that mental illness is not as easily understood as many physical illnesses. For family, it can be difficult to know how to help. We also see that mental illness can affect everyone: even a rich and successful young man at the top of his game.

Some might question whether comedy is an appropriate genre for portraying an undoubtedly serious issue like mental illness— this was discussed during Monday night’s mental health themed Q&A, which featured Please Like Me writer and star Josh Thomas on the panel. It is certainly possible that a comedic depiction of mental illness could further stigmatise the issue and those who suffer.

However, neither Timothy nor Please Like Me, in which the character of Josh’s mother battles bipolar disorder and has attempted suicide, seems to treat mental illness in this way. Instead, some light-hearted comedy goes a long way to humanise the experience, perhaps making it more relatable and less ‘taboo.’ In these shows, we are not laughing at the characters, but at the somewhat absurd situations these illnesses can create. Perhaps humour can be a coping mechanism when it comes to understanding mental illness, and as long as it is combined with a healthy dose of compassion, it can be an effective way of bringing the issue into the mainstream.

Of course, Timothy is just one part of a much bigger effort on the part of the ABC to bring mental health into focus by raising funds and awareness, sharing information and letting people know they are not alone. It is truly heartening to see our public broadcaster devote resources to an issue that has often been sidelined in mainstream discussions and has been swept under the carpet in so many areas for far too long. Whether it is through a challenging documentary, a lively discussion on Q&A or a short comedy like Timothy, addressing mental illness and its effects on our society is a great use of our public airwaves.